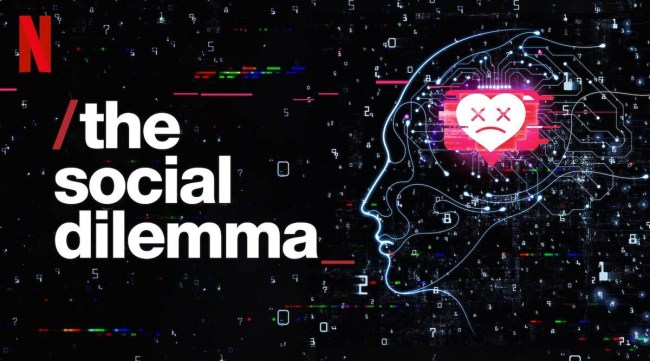 One of the more popular documentaries to appear on Netflix over the past several weeks has been The Social Dilemma.

The Social Dilemma is a powerful exploration of the disproportionate impact that a relatively small number of engineers in Silicon Valley have over the way we think, act, and live our lives. The film deftly tackles an underlying cause of our viral conspiracy theories, teenage mental health issues, rampant misinformation and political polarization, and makes these issues visceral, understandable, and urgent.

The documentary’s description also states, “The collective lack of understanding about how these platforms actually operate has led to hidden and often harmful consequences to society—consequences that are becoming more and more evident over time, and consequences that, the subjects in The Social Dilemma suggest, are an existential threat to humanity.”

Numerous former employees of companies involved in social media, including former Google design ethicist Tristan Harris, Facebook ‘like’ button co-creator Justin Rosenstein, and former Pinterest president Tim Kendall, made their concerns very clear during the documentary. Several even indicated regret over their involvement in creating these platforms and some even no longer utlitize the social media tools they helped create.

The one social media company that seemed to bear the brunt of the criticism is Facebook.

There has certainly been more than enough ammunition provided by Mark Zuckerberg’s creation over the past several years and as a result there has no shortage of high profile critics.

Facebook, however, doesn’t like the way The Social Dilemma portrayed the company and let it be known in a scathing, lengthy blog post titled “What ‘The Social Dilemma’ Gets Wrong” that was published over the weekend.

In the 1,400 word essay, Facebook breaks down into seven parts just exactly what they disagree with in the documentary.

“Rather than offer a nuanced look at technology, it gives a distorted view of how social media platforms work to create a convenient scapegoat for what are difficult and complex societal problems. The film’s creators do not include insights from those currently working at the companies or any experts that take a different view to the narrative put forward by the film. They also don’t acknowledge—critically or otherwise—the efforts already taken by companies to address many of the issues they raise. Instead, they rely on commentary from those who haven’t been on the inside for many years.”

Then heads off in seven different directions.

1. ADDICTION – Facebook builds its products to create value, not to be addictive.
“Our News Feed product teams are not incentivized to build features that increase time-spent on our products.”

2. YOU ARE NOT THE PRODUCT – Facebook is funded by advertising so that it remains free for people.
“We provide advertisers with reports about the kinds of people who are seeing their ads and how their ads are performing, but we don’t share information that personally identifies you unless you give us permission.”

3. ALGORITHMS – Facebook’s algorithm is not ‘mad.’ It keeps the platform relevant and useful.
“Facebook uses algorithms to improve the experience for people using our apps—just like any dating app, Amazon, Uber, and countless other consumer-facing apps that people interact with every day.”

Instagram is becoming increasingly annoying. I want to turn of ALL the ads because there's one after every two posts lately. And the posts need to return to chronological order. This is impossible.

4. DATA – Facebook has made improvements across the company to protect people’s privacy.
“Over the last year, we have made significant changes as part of our agreement with the Federal Trade Commission.”

5. POLARIZATION – We take steps to reduce content that could drive polarization.
“The overwhelming majority of content that people see on Facebook is not polarizing or even political—it’s everyday content from people’s friends and family.”

6. ELECTIONS – Facebook has made investments to protect the integrity of elections.
“We’ve acknowledged that we made mistakes in 2016. Yet the film leaves out what we have done since 2016 to build strong defenses to stop people from using Facebook to interfere in elections.”

Then make your own assessment.