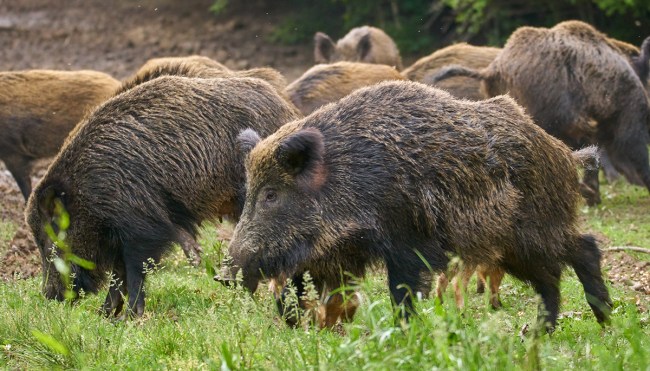 It’s been around two-and-a-half years since the internet erupted over a tweet that Jason Isbell received after the singer voiced his support for increased gun control measures following yet another mass shooting in America, which came from a man who claimed he had a serious issue with  “the 30-50 feral hogs” that routinely invaded his property when his children were playing outside.

Many people who came across the tweet couldn’t believe this was a real, actual issue that anyone would have to deal with on a frequent basis, but it’s actually no laughing matter. As Shakira learned the hard way during a trip to a park in Spain earlier this year, unchecked hog populations have caused a number of issues in communities around the world (in 2020, government officials sounded the alarm over the rise of violent and disease-riddled “Super Pigs” that are proliferating in America).

Earlier this year, Joe Rogan spoke with an expert who shed some light on the many issues stemming from the estimated three million feral hogs that currently call Texas home. One of those problems is the animals’ sheer disregard for laws against trespassing—which was highlighted in a video that was recently captured in Missouri City that showed dozens of them descending on a neighborhood in the middle of the night.

According to KHOU, the owner of the home equipped with the surveillance camera that captured the feral hogs invading says he and his neighbors discovered their lawns and flowerbeds in shambles when they woke up that morning.

The outlet also spoke with a local trapper who estimated 75% of the local wild pig population would have to be captured and killed in order to restore some semblance of order, so it’s hard to imagine we won’t see similar incidents unfold in the near future.