Some Evil Genius Put Fireworks Inside A Block Of Ice, Blew It Up, And Filmed It In Slow Motion 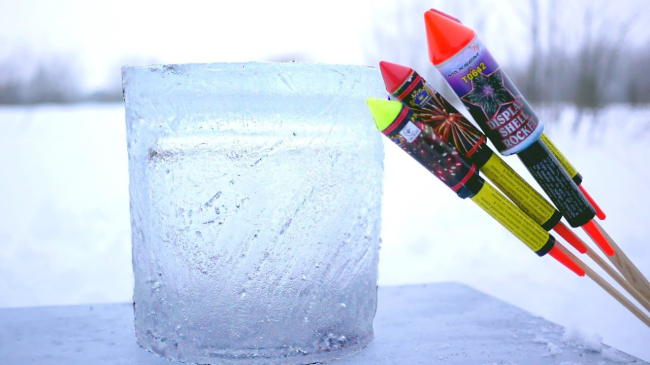 Let’s be honest here. Explosions, when conducted under the correct circumstances, are awesome. Okay, fine. Explosions, under pretty much any circumstance, are great. Especially when someone films it and then converts it into slow motion video.

Which is exactly what YouTuber [OddlyTube] did when they wanted to see what would happen if you set off fireworks encased in a block of ice. Turns out, as one would expect, it’s pretty awesome.

The Ukraine-based YouTuber, who writes, “Do not try this at home or anywhere else!!!” because he pretty much has to, not only blows up a block of ice with fireworks frozen inside of it, he also blows up a snowball, a snowbank, and perhaps best of all, a snowman.

Why is watching something get blown to smithereens so incredibly satisfying? Is there something wrong with me? Or is that normal?

Related: Man Fills Fridge With Explosive Tannerite And Shoots it With A Gun, Nearly Dies From Explosion

Plus, the aforementioned snowman getting blowed the hell up.

Oh, and to answer my question about why humans like myself love explosions so much?

Some folks think it’s because we (usually) have some form of control over them, or goes way back to evolution and the thrill humans received at being able to control or “tame” fire.

Others think it has to do with a fascination with things that are powerful, curiosity about extreme situations of any sort, and strong emotional reactions to images or sensations that excite or frighten us.

According to Daniel Glaser, a neuroscientist and the director of Science Gallery London at King’s College in the United Kingdom, it’s mostly just because they scare us… but not too much, reports Popular Science.

…why would something that we fear generate glee? According to Glaser, unlike the unbridled terror of the unknown, fireworks-induced fear is controlled. After seeing these light-up shows over and over again, our brains anticipate the bang that comes after the flashes of light. That’s unlike a thunderstorm in which we know thunder follows lightning, but when or how loud the next boom will be is out of our control. This also explains why these celebratory pyrotechnics often terrify dogs. While we know a sound is coming after the firework takes flight, dogs are caught off guard by the sudden, loud noise.

Whatever the reason, I think we can all agree explosions are almost without fail cool AF to watch.