Heads Up, Scientists Just Found The First Murder Hornet Of 2021 In The United States 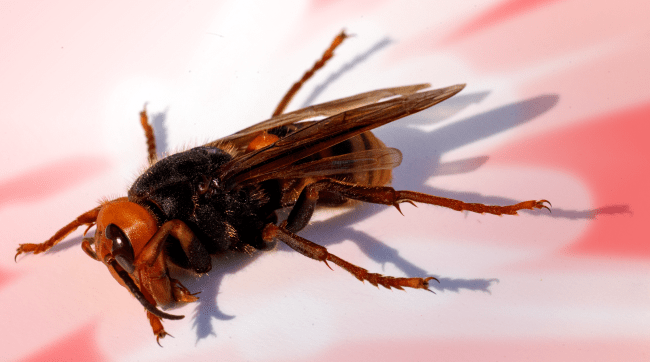 The first murder hornet of 2021 has been found in the United States and it looks like we’re going to have to steer clear of Seattle for awhile.

According to Phys.org, scientists found a dead Asian giant hornet, AKA murder hornet, north of Seattle – the first one discovered in the country this year.

A resident of Marysville, Washington was the one who sounded the alarm, alerting authorities that she had found what she believed to be one of these giant bugs with mandibles shaped like spiked shark fins that decapitate bees and fly away with their thoraxes to feed their young.

No big deal, right? Well… take a look at the suits scientists wear to corral these nasty creatures.

Apparently these murder hornets have stingers long enough to puncture a standard beekeeping suit. Oh, and if you get stung by one, not only does the puncture wound hurt, they also slip a little venom into your body. In Japan, they kill up to 50 people a year. And now we’ve got them. Again.

They attack hives, destroying them in mere hours and decapitating bees in what scientists call their “slaughter phase.” How they got here from Asia is unclear, although it is suspected they travel on cargo ships.

“Hitchhikers are a side effect of all the commerce we do globally,” said Sven Spichiger, an entomologist with the state Agriculture Department who is leading the fight to eradicate the hornets.

Any living thing that has what scientists call a “slaughter phase” must be stopped and without mercy.

“The find is perplexing because it is too early for a male to emerge,” said Dr. Osama El-Lissy, deputy administrator for the U.S. Department of Agriculture’s quarantine program.

They also don’t know exactly how the male murder hornet got to Snohomish County, because new males usually don’t emerge until at least July.

Sven Spichiger, an entomologist with the state’s agriculture department, said, “We’ll now be setting traps in the area and encouraging citizen scientists to trap in Snohomish and King counties.”

Do these “citizen scientists” get one of these suits?

The USDA lists murder hornets on the list of quarantine pests, which means Washington state will be given additional tools to help get rid of them.

Let’s just hope they do a better job of keeping track of them than they did last year.