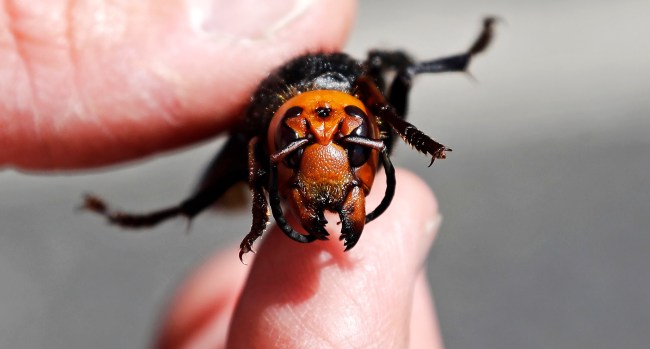 Another giant Asian murder hornet escaped from the clutches of Washington State Department of Agriculture scientists who had hoped to track it back to its nest and eradicate it. So be on the lookout.

A couple of months ago they captured the very first murder hornet in the United States, and, well, they lost that one too.

At that time it was reported that Washington officials only had two months to locate and destroy the nest because the queens will mate with male hornets and start reproducing new queens and workers… around mid-September.

Last week, scientists with the Washington State Department of Agriculture (WSDA)captured a live Asian giant hornet — known as “murder” hornets for their ability to decimate honeybee populations — and used dental floss to attach a tracking device to its body, which “worked quite well,” said Sven Spichiger, WSDA’s managing entomologist, during a news conference on Monday.

When scientists released the hornet into the wild onto an apple tree, they were initially successful in tracking the insect, but after some time they were unable to locate a signal when it flew into a heavily vegetated area and then quickly darted away — thus evading the scientists.

Dental floss… they used… dental floss… and it failed. Why didn’t they just use duct tape?

“This one was a lot feistier,” said Spichiger.

Earlier this month, WSDA officials said they tried to glue a radio tag to a different murder hornet so they could follow it back to the nest, but the glue didn’t dry fast enough, the tag fell off, and the hornet was unable to fly.

On the plus side, at least according to Spichiger, “We did get an initial direction of the flight. We were able to meet with several of the property owners and get a few more eyewitness accounts of seeing hornets earlier the week before or earlier in the summer, and so we are starting to narrow down exactly where the hornets’ nest is.”

They’re narrowing it down…

So, what about all that mating that was supposed to have been happening? Anyone? Bueller? Nothing? Okay.

The giant Asian murder hornet, which can grow to up to two inches, reportedly “only” kills, at most, a few dozen people a year in Asia. Their nickname actually comes from the fact that they can destroy honeybee hives in a matter of hours, killing the bees by decapitating them.

Once the WSDA finally finds these murder hornet nests their plan is to vacuum the hornets out of the nest and then use carbon dioxide gas to knock out any hornets the vacuum missed.

So, dental floss, glue and a vacuum cleaner… those are our tools for stopping something with “murder” in its nickname. No wonder we’re all doomed.