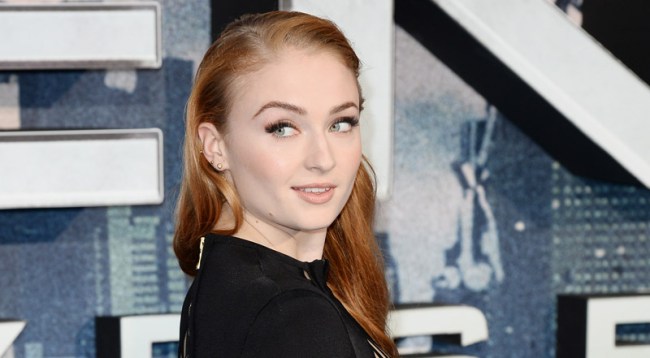 See what I did there in the headline? (I’m sorry. Moving on…) We may have just lost Hugh Jackman when it comes to any future X-Men movies (maybe he’ll play James Bond next, oh, and thanks, Jerry Seinfeld), but we still have much to be excited about with that part of the Marvel Cinematic Universe, thanks to Sophie Turner’s turn playing Jean Gray, AKA Dark Phoenix.

Back in February, Turner revealed that she was “about to start shooting the next X-Men.” At the time I postulated that what she was referring to could be, in this order, the rumored X-Men: Supernova movie, New Mutants, or, and I called it a long-shot, the film be about her as Dark Phoenix.

Well, we know it wasn’t New Mutants she was referring to, because already saw that terrifying trailer.

We eventually found out that my long shot came in as it was reported back in October that X-Men: Dark Phoenix has finished shooting.

And now, with that part of the production being wrapped, on Thursday we were finally treated to our first look at some photos of Turner as Jean Gray slash Dark Phoenix for her upcoming X-Men movie and they are pretty frickin’ awesome.

Uhh… yeah, I am definitely going to see this movie.

Set in 1992, about 10 years after the events of last year’s X-Men: Apocalypse, Dark Phoenix opens with the X-Men, including Mystique (Jennifer Lawrence), Beast (Nicholas Hoult), Storm (Alexandra Shipp), Nightcrawler (Kodi Smit-McPhee), and Quicksilver (Evan Peters), in a new, unexpected role: national heroes. Charles Xavier (James McAvoy) even lands on the cover of Time magazine. But his growing ego puts the team at risk. “Pride is starting to get the better of him, and he is pushing the X-Men to more extreme missions,” [director Simon] Kinberg says. After they’re dispatched to space for a rescue mission, a solar flare hits the X-Jet and the surge of energy ignites a malevolent, power-hungry new force within Jean (Game of Thrones’ Sophie Turner)— the Phoenix.

The film will also feature the X-Men’s first trip to outer space and an an otherworldly shapeshifter played by Jessica Chastain.

James McAvoy (AKA Professor X) says, “This is probably the most emotional X-Men we’ve done and the most pathos-driven. There’s a lot of sacrifice and a lot of suffering.”

On the plus side, at least this can’t happen again…

Check out the rest of EW’s preview of X-Men: Dark Phoenix right here.