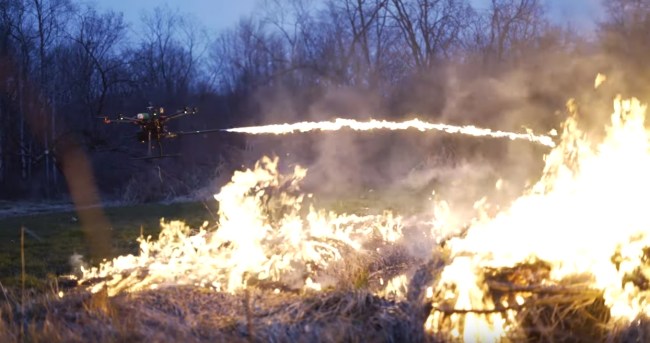 In January of 2018, Elon Musk’s Boring Company sold flamethrowers that were called “Not-a-Flamethrower” because they really weren’t flamethrowers but rather a $500 glorified propane torch. The fine folks over at Throwflame want to not only arm you with an actual flamethrower, but it is also mounted on a drone.

The Ohio-based Throwflame have a lot of time on their hands since they live in Ohio, but that gives them plenty of time to build awesome flamethrowers. Their latest model is the TF-19 Wasp, a drone equipped with a flamethrower.

Apparently, the flamethrowing drone is designed for clearing infrastructure, agriculture land management and for obliterating pests such as melting huge wasp nests as seen in the promo video.

But, you know you’re not going to use a flamethrower drone for any of those legitimate reasons. You’re just going to set fires like a giddy arsonist with oddly shaped feet.

How badass would it be to put dragon wings on the drone, fly over your target and then yell “DRACARYS!”

It would also be helpful to own a flamethrowing drone when the zombie apocalypse goes down.

Throwflame is the self-proclaimed oldest flamethrower manufacturer in the United States, so they know what they’re doing when it comes to flamethrowers, unlike Elon Musk. Throwflame’s fire-breathing TF-19 Wasp has a price tag of $1,499, which is only for the drone flamethrower attachment. Throwflame constructs complete flamethrower drones upon request.

If flamethrower drones aren’t your cup of tea (which doesn’t make sense since it should be everyone’s cup of tea), video emerged this week of a drone that shot fireworks.

Video went viral of a drone firing fireworks in Brazil. Apparently, one person was annoyed at the loud music being played during a party. So as any rational person would react, they deployed a drone into the sky and the improvised aerial assault weapon rained down fireworks at people. Hey Brazil, who do you think you are? Deploying drones and firing on people is America’s thing.

There are also reports that the video is a “prank” pulled off by popular Brazilian Instagram personality, Lucas Albert. No word on if or where you can purchase the firework-shooting drone.

Either way, maybe we shouldn’t have flamethrowing drones or firework-shooting drones.