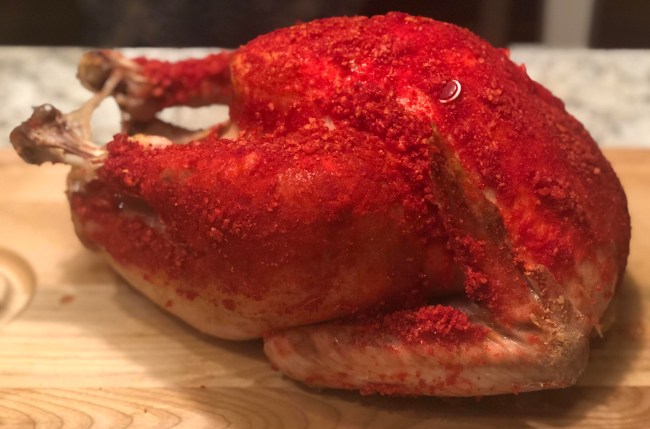 It doesn’t take much to rile up the internet, and earlier this week, an ABC affiliate in California managed to rustle an impressive amount of jimmies when it suggested a fun way to spice up this year’s Thanksgiving would be to cover a turkey in Flamin’ Hot Cheetos.

The station that posted the tweet took the bulk of the hate but the ire should have really been directed at whoever at Reynolds came up with the recipe, someone who was so preoccupied with whether or not they could that they didn’t stop to think if they should.

However, I’m not one to talk.

When the tweet started to make the rounds, it was widely derided and vilified as people fired off reaction GIFs to convey a sense of disgust and revulsion that mere words couldn’t do justice.

This wasn’t the first viral food to be at the receiving end of hyperbolic internet outrage and it won’t be the last, but as I scrolled through the vitriolic responses, I couldn’t help ask myself the same question Ryan Reynolds so famously did in Harold & Kumar Go to White Castle:

Was this not just a summation of one of the biggest problems plaguing society today? Should something be dismissed and ridiculed for having the audacity to break free from norms and traditions without first being given a chance?

So, I decided to give it one.

I headed to the store to grab a turkey and enough Flamin’ Hot Cheetos to put a Soundcloud rapper in a coma. I also had to pick up oven bags, which are apparently used for real, actual cooking and not just by people who are too cheap to buy authentic replacements for their Volcano.

I headed to the register and checked out before the cashier asked me if I wanted a receipt.

I declined. There was no coming back from here.

I headed home to kick off the next leg of my journey and rounded up the required ingredients, which was pretty easy to do because there were three of them. 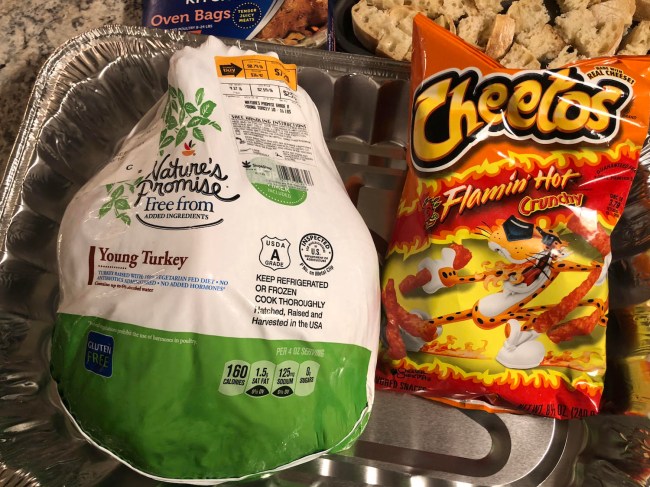 The first task was to crush the “hot puffed cheese sticks,” and while the recipe recommended using a food processor, I decided to do things the old-fashioned way: using a rolling pin to beat the hell out of a Ziploc bag full of them. I felt like Helena Bonham Carter in the scene from Sweeny Todd where she proudly sings about being bad at making pies, a reference I’m sure approximately zero people reading this will appreciate.

I greased up the turkey with a healthy (and, in turn, unhealthy) amount of olive oil before encrusting the bird with the Flamin’ Hot Cheetos and stepping back to observe my handiwork. 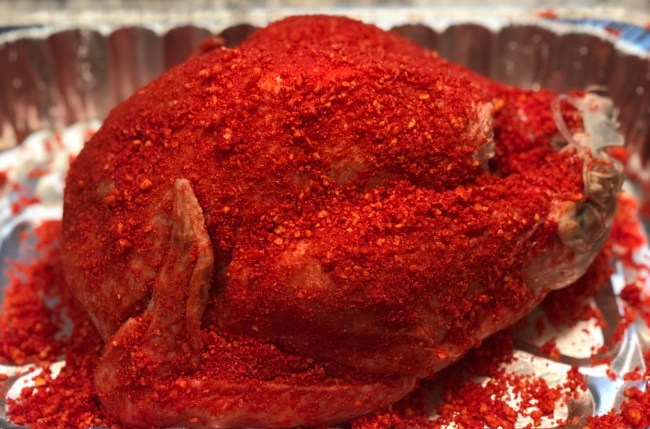 I’d never really wondered what it would look like if you covered a turkey in enough crushed Adderall to help a blue whale ace his SATs but I’d accidentally kind of gotten an answer.

I threw a bit of flour in the oven bag as instructed and placed the turkey inside before realizing I had no idea why the hell I was cooking a turkey in a plastic bag in the first place, which seemed like exactly the kind of thing that’s known to cause cancer in the state of California.

No matter. There was no turning back now. Maybe I’d get a class action lawsuit out of it one day.

I placed the turkey in the oven, where the recipe stated it would have to sit for an unspecified amount of time in order to reach the required temperature. Normally, checking the doneness would be pretty straightforward, but I had to repeatedly stab through the plastic to do so and felt like Dexter Morgan exacting justice with every attempt.

Finally, it was done. 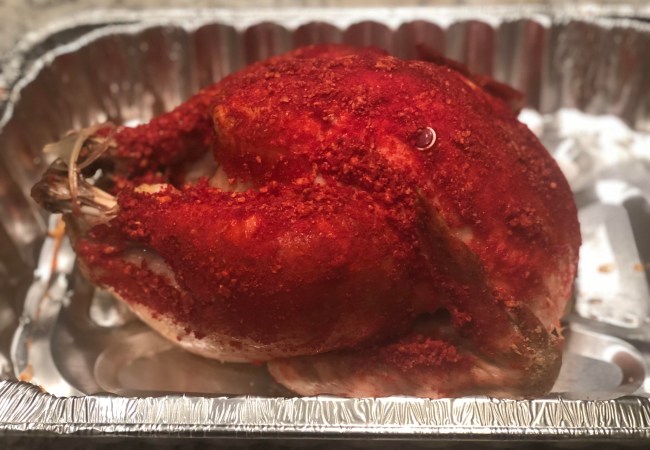 I couldn’t wait to try it, and at the same time, I dreaded the prospect of having to take a single bite.

However, try it I did. I carved it up once it had cooled down, and by “carved it up” I mean I tore off a drumstick and carnally ripped off a chunk.

I’d love to say it tasted like a truck full of hot sauce crashed into a Renaissance Faire, but to tell the truth, it tasted like… well, turkey.

I wasn’t expecting much but I was at least expecting something. The crunch was virtually nonexistent and the trademark flamin’ hotness of the Cheetos had all but disappeared, leaving behind a turkey as bland and uninspired as Anne Hathaway before Stanley Tucci shows her the light in The Devil Wears Prada.

There is nothing patently offensive about a turkey covered in Flamin’ Hot Cheetos. If anything, I was offended by the disservice it does to one of the greatest treats to ever grace convenience store shelves.

The real takeaway here is that you shouldn’t be so quick to post a GIF of the puppet from Team America vomiting violently just because you saw a picture of a weird food online— you should wait for a random person on the internet to try it first and then parrot their opinion as your own.

So how would I say I really feel about a turkey covered in Flamin’ Hot Cheetos?

The world may never know.