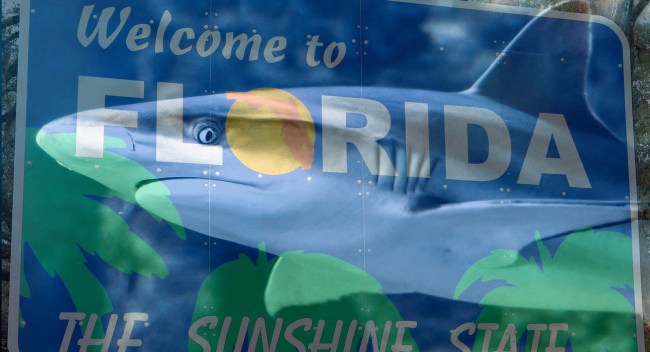 Poor Florida Man, he simply cannot catch a break. When he isn’t finding dead bodies in his buddy’s trash can or stealing bulldozers to mow down political yard signs, he’s getting bitten by freaking sharks.

This week, Florida Man was just minding his own business, chilling out in the waters off Siesta Key Tuesday morning when the unexpected, at least to him, happened: a shark attack.

Fox 13 News reports Florida Man was bitten on the hand and arm by a shark, but rather than call 911 or head to the nearest hospital, Florida Man decided to walk home.

Apparently, while he was taking his stroll home, a woman happened to notice that, according to her 911 call, our Florida Man was “bleeding to death.”

While on the line with the 911 dispatcher, the woman reportedly reassured Florida Man that “everything’s going to be fine” as she followed instructions from the dispatcher on how to control Florida Man’s bleeding.

10 minutes later the call disconnected, but never fear, Florida Man was admitted to Sarasota Memorial Hospital where hospital staff confirmed that the injury was, indeed, a shark bite.

Related: Florida Man Steals Deputy’s Cruiser, Credit Card Because He Was On A ‘Spiritual Journey’

According to the Sarasota Herald-Tribune, there have been just seven unprovoked shark attacks recorded in Sarasota County over the past 138 years.

Like I said. Florida Man simply CANNOT catch a break these days.

Wow, our healthcare system is so bad people refuse it even after being attacked by a shark:
Florida man walks home bleeding 'to death' after sustaining a shark bite – USA TODAY https://t.co/ZSMLBFPgxV

Siesta Key sure is one freaky place filled with all sorts of unusual creatures.