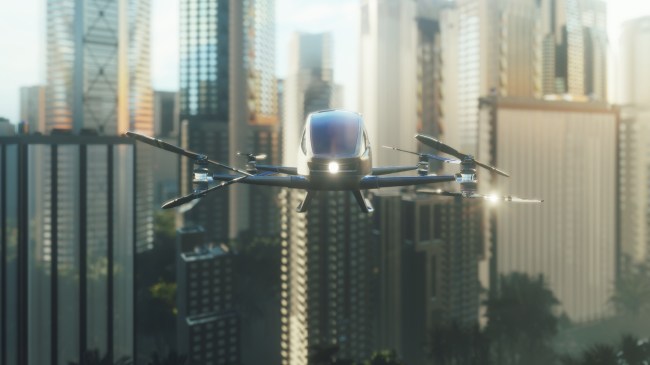 My earliest memories of what I thought ‘the future‘ would be like probably came from watching old reruns of The Jetsons cartoon on the weekends where the dad would go to work in his flying car. I was a tiny kid but I figured in the future we’d all have flying cars because, well, having flying cars would be awesome.

Getting to cruise down the road and pop open my car’s wings to take off and fly through the sky to exactly where I needed to go and do so at an impressive top speed of 124 mph sounds like the dream. Side note: I love a good car chase streamed on live TV. They happen all the time in California but rarely take place on the East Coast and when they do they’re almost never shown on live TV. I’m sitting here thinking about how awesome it would be to watch a high-speed chase unfold when the police were attempting to capture a flying car. That’s a future I’m looking forward to.

So what we see below is KleinVision’s flying ‘Air Car’. This isn’t the world’s first flying car but it’s certainly the best I’ve seen so far because unlike other flying cars that look mostly like planes this one actually looks more like a car than a plane or jet. It cruises around like a car, stops, releases the wings, and then flies away. Check it out in action:

“With Aircar you will arrive at your destination without the hassle of getting a ride to airport and passing through commercial security, you can drive your AirCar to the golf course, the office, the mall or your hotel and park it in a normal parking space,” said Anton Zajac, Klein Vision’s co-founder, investor and pilot. . . . . . #aviationlovers #aviationphotography #aviationgeek #aviationdaily #aviation4u#aviationphotography #aviationlife #design#madeinslovakia #designengeneer #car#flyingcar#carporn#ideas#future#futuretechnology

Cars can be heavy, but planes must be light. The two-seat model weights 1,100kg and can carry additional load of 200kg per flight. Powered by a BMW 1.6l engine, the car-plane has an effective power output of 140HP. Estimated travel range of AirCar is 1,000km and flight consumption of 18 l/h. AirCar takes you from ground to sky with a takeoff of 300m reaching speeds up to 200 km/h. But most importantly, the stability and controllability of the AirCar is accessible to any pilot. “The key flight parameters confirmed all theoretical concepts and calculations that the development of the AirCar was based on. Following the completion of all required flight tests in compliance with EASA regulations, we will deliver a model with a certified ADEPT, 300HP engine within the next 6 next months” said Professor Stefan Klein, Klein Vision’s CTO and test pilot. “The good news is, we already have a buyer,” Professor Klein added. . . . . . #aviationlovers #aviationphotography #aviationgeek #aviationdaily #aviation4u#aviationphotography #aviationlife #design#madeinslovakia #designengeneer #car#flyingcar#carporn#ideas#future#futuretechnology

According to the Robb Report, KleinVision’s Air Car runs on a 1.6-liter BMW engine with 140 horsepower. In the air, it has a flying range of around 620 miles and is capable of reaching a top speed of 124 mph.

While the AirCar’s design leaves something to be desired—it looks like something from a straight-to-VOD sci-fi movie—its driving abilities look certain to set it apart from the rest of the current crop of flying cars, including the SkyDrive SD03 and the Volocopter VoloCity. The ultra-lightweight two-seater is powered by a 1.6-liter BMW engine that put out 140 horsepower, according to a press release from the company. The startup also claims that the craft will have a flying range of roughly 620 miles and be able to reach a top flying speed of 124 mph.

While those numbers are pretty impressive, the company seems especially proud of the fact that its flying car can actually drive. “With AirCar you will arrive at your destination without the hassle of getting a ride to [an] airport and passing through commercial security, you can drive your AirCar to the golf course, the office, the mall or your hotel and park it in a normal parking space,” co-founder Anton Zajac said in a statement. (via Robb Report)

It only took them 18 months from the time they started development on the Air Car to its first successful flight so it’s pretty wild to imagine where we’ll be 18 months from now and a few years after that. By 2030 we might actually have the option to go out and buy a flying car if we’re wealthy enough.