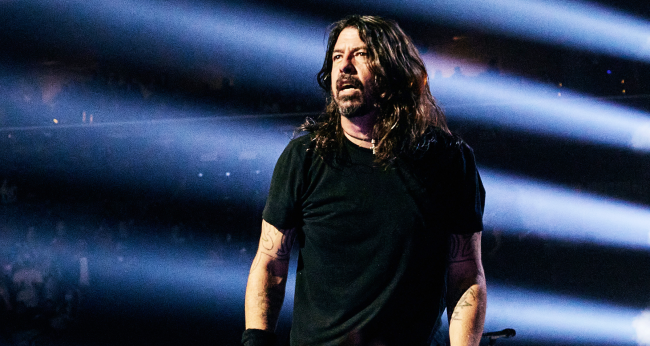 Go ahead and count Dave Grohl of the Foo Fighters among the list of famous musicians including Demi Lovato, Sammy Hagar, and Miley Cyrus who say they believe in aliens and UFOs.

Not that Dave Grohl being a big UFO guy should be much of a surprise. Not when you consider the fact that the name Foo Fighters originated as a World War II term coined by Allied aircraft pilots for unidentified flying objects, or UFOs. (It’s also, according to Grohl, “the stupidest f—ing band name in the world.”)

Grohl, who will be inducted into the Rock and Roll Hall of Fame on October 30th (for his work with the Foo Fighters – he was already inducted as part of Nirvana in 2014), is currently on a book tour promoting his new memoir The Storyteller: Tales of Life and Music.

As a part of his book tour, the 52-year-old Grohl was interviewed by BBC Music and discussed everything from being called “the nicest man in rock” to how he came to write a book and many things in between.

The book came about, Grohl says, because he needed “some sort of creative outlet” during the pandemic lockdown.

“In the book, I’m basically writing from the perspective of someone that feels like they’re having an out-of-body experience,” said Grohl.

“I can’t believe this has happened to me – whether it’s getting to jam with one of my all-time heroes, or just being able to jump on a plane, have a drink and fly to the next town to play to thousands of people.

“Every day I have these moments where I think ‘Oh, this is what I’m going to see just before I die.'”

As for the Foo Fighters being named after a term for UFOs, Grohl admits he is “a total UFO nerd” and that he’s been following the latest UFO news, including the declassified reports released over the summer by the Pentagon.

“Oh, I’m a total UFO nerd and I have been for decades. So I’ve been following it – but what’s happening now, I don’t think is new,” says Grohl.

“I’m of the belief that that we are not alone, and I’m totally okay with that, you know? It doesn’t really change my day too much. But I’m the romantic type. When I look up at the stars I think, ‘God, I hope we’re not alone.’ What a drag that would be.”

When asked whether he would jump on board should a spaceship ever descend over a Foo Fighters gig, Grohl says he would probably pass.

“I wouldn’t want to leave this behind – so maybe I’d invite them over to my place,” he replies. “Why not? Throw a barbecue for some aliens.”

Makes sense. When asked about being called “the nicest man in rock,” Grohl humbly says about the honor, “I’m just being polite, come on!”

Of course, he is. After all, who else would invite aliens from another planet over for a barbecue?