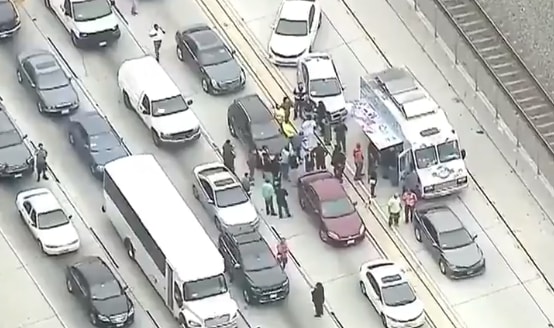 In quite possibly the most L.A. moment ever, a food truck opened up and served hundreds of hungry and bored commuters after a fire raged that caused traffic on both sides of the freeway that lasted for hours.

On Friday morning, a tanker truck and an SUV collided on the 105 Freeway in Hawthorne, California, which is a popular thoroughfare to the Los Angeles International Airport. The accident caused traffic to back up for miles and the highway wasn’t reopened for FOUR miserable hours.

Thankfully, a food truck was also stuck in the traffic and took the appropriate action — opened up on the middle of the 105 Freeway so frustrated drivers could at least eat some fresh food to try to forget about the torturous traffic.

Thousands of commuters were stranded on the freeway Friday morning after a tanker truck crash shut down all lanes. So, Isabella Lario did what you do when you're stuck in traffic with a food truck: she made opened up shop. https://t.co/11dvca958M pic.twitter.com/2ANGoN6Mxx

A win-win for the food truck, who gets to make some dough with a desperate clientele and zero competition. The drivers get to take their mind off waiting for hours with some yummy breakfast. Definitely making the most out of a horrendous situation. Despite being the only food joint on the highway, the AC Catering food truck offered grub at half price. Let’s just hope that there was a truck carrying porta-potties also stuck on the freeway.

Traffic NIGHTMARE on the 105 Freeway in Hawthorne after a bad wreck. Food truck to the rescue! #LAtraffic #foodtruck #Hawthorne #developing #fox11 pic.twitter.com/t0thfLD5FM

#Sky2 was overhead as people waited in line at a food truck that opened up in the middle of the freeway after a fatal tanker truck explosion closed all lanes of the 105 in #Hawthorne. More on the crash from #CBSLA: https://t.co/nbWWJwsZLP @StephatCBS2 pic.twitter.com/QJ81jJ9oIU

Sadly, there was two fatalities from the deadly crash that occurred at 5:15 in the morning. It took emergency crews over an hour to put out the fire as the tanker leaked fuel all over the highway.

Some stranded commuters taking advantage of a food truck also stuck in the backup. pic.twitter.com/2Ws0XUJugc

This is reminiscent to the Malcolm in the Middle episode with the ice cream truck in traffic.