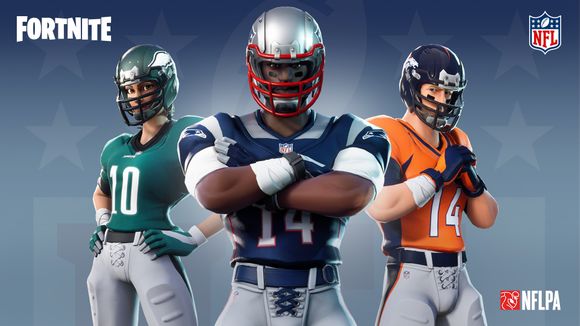 Are you ready for some Fortnite football?!?!? After embracing superheroes and comic books in Season 4, Fortnite is running with a football theme next. Epic Games teamed up with the NFL to bring official team jerseys to the massively popular video game.

Starting on November 9th at 7 pm ET, NFL team “outfits” will be available in the Battle Royale Item Shop to purchase with V-Bucks. Skins generally cost 1,200-1,500 V-Bucks, or $12 to $15. Fortnite gamers can purchase and customize up to eight outfits of their favorite NFL teams and can change the jersey numbers from 1-99, but there will be no names on the back of the jersey. The NFL team uniforms will be available as three male and three female figures. Now after you get sniped in Battle Royale, you can have a 10-year-old make derogatory comments about your sweet mother and then piss on you for your character wearing a Blake Bortles jersey. Awesome.

We are gearing up for something big. #FortniteNFL 🏈🎮 🏈🎮

Besides the customized NFL jerseys there will also be harvesting tools, gliders, and a referee outfit. There will also be football-themed emotes, which is rich because The No Fun League has had a history of fining players for touchdown celebrations, including certain dances.

RELATED: This Is Not A Drill: Nerf Is Making A Fortnite AR-L Blaster Based On The SCAR

“We see the popularity of Fortnite every day at the NFL as many of our players are passionate about this game,” said Brian Rolapp, Chief Media and Business Officer at the NFL. “This partnership represents a great opportunity for millions of NFL fans who are Fortnite players to express their fandom inside the game while at the same time exposing our brand to countless others.”

“We have so many football fans at Epic and we know a lot of the game’s fans share that same enthusiasm,” said Mark Rein, co-founder of Epic Games. “Allowing our players to represent their favorite teams in the game was too cool of an opportunity for us to pass up, and we couldn’t be happier with how they turned out!”

Fortnite has had a relationship with sports in the past, mostly because professional athletes love playing Battle Royale so much that it actually affected their performance on the field. The Canucks banned players from playing Fortnite and Boston Red Sox pitcher had to stop gaming after being diagnosed with carpal tunnel syndrome.

In other Fortnite news, the mysterious purple Cube that was floating around the map opened up. The explosion ignited an interdimensional vortex that transported players into a floating white-colored, space-like world.