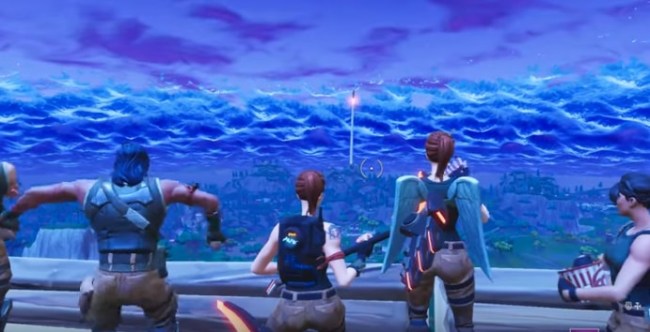 The much-ballyhooed Fortnite rocket launch happened on Saturday afternoon and it was quite the spectacle. The missile pierced the sky and left a gaping crack in its departure from the Battle Royale map. However, one gamer wasn’t there to gawk at the fiery blast-off, instead, they were there to rack up cheap kills.

The rocket launch was a momentous one-time occasion where all Fortniters would lay down their weapons, gaze at the rocket launch, and attempt to figure out why there was a massive crack in the sky. While everyone had their eyes in the sky, a player set the record kill record with one very savvy and savage shot.

Many in the Fortnite community built a massive ramp to get a birds-eye view of the rocket launch. A gamer by the gamer tag of Elemental_Ray destroyed the ramp and caused all of the players on the structure to plummet to the ground. That one smart, yet sinister move killed 48 players and handed Elemental_Ray the Fortnite kills record.

He broke a ramp that help 48 people during a Rocket Viewing Party.

See, this is why we can’t have nice things. Many of the gamers missed out on the rocket launch, but on the bright side, they are now part of history since they helped set the record.