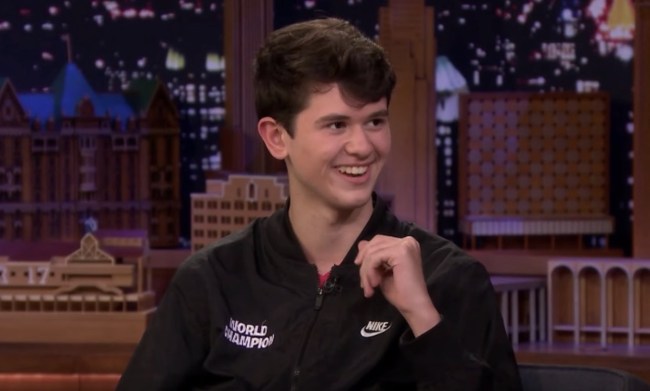 The first-ever Fortnite World Cup was held at the Arthur Ashe Stadium in Queens, New York this past weekend and it led to some overnight teenage millionaires. 15-year-old Jaden Ashman became a millionaire before he’s even old enough to drive. And 16-year-old Kyle “Bugha” Giersdorf from Pennsylvania won an almost unfathomable THREE MILLION DOLLARS.

The 16-year-old Fortnite World Cup Solo Champ notched a victory in his first-round with nine in-game kills. He tacked on dozens of kills in the subsequent rounds and finished with a 59-point lead over second-place and took home THREE MILLION DOLLARS for the win.

Kyle “Bugha” Giersdorf was already well known within the world of Fortnite but now he’s an overnight celebrity. He has been making the mainstream media rounds in the past 36-hours since his $3 million win. CNN caught up with him to ask about what it was like and he said “Words can’t really explain it. I’m so happy, Everything I’ve done in the grind has all paid off and it’s just insane.”

Kyle “Bugha” Giersdorf was also a guest on The Tonight Show Starring Jimmy Fallon last night where he discussed what his day-to-day life looks like. Jimmy asked him what a typical weekend day training routine might look like and, man, I’m jealous. Waking up at noon or 1pm before rolling out of bed and making millions sounds pretty damn glorious.

So how exactly did this 16-year-old beat the world’s best gamers and take him a $3 million for his efforts? Here’s more of what he told CNN:

He said that in the last round, after finding a safe spot to scope out enemies and collecting a lot of loot to use as ammunition, his championship win “was pretty much sealed from there.” After celebrating his win, he turned around to hug his family members who had traveled from his hometown in Pennsylvania to see him play.

A THIRTEEN YEAR OLD from Argentina named Thiago ‘King’ Lapp won $900,000 for finishing in 5th place. Thirteen is the youngest that competitors are allowed to compete in Fortnite and this kid is almost a millionaire already!

Even the person who finished in LAST place at the games made $50,000, making this one of the biggest paydays in eSports if not THE biggest.

For more on the 15-year-old who became an overnight millionaire, check out this great article here on BroBible detailing the success of Jaden Ashman.