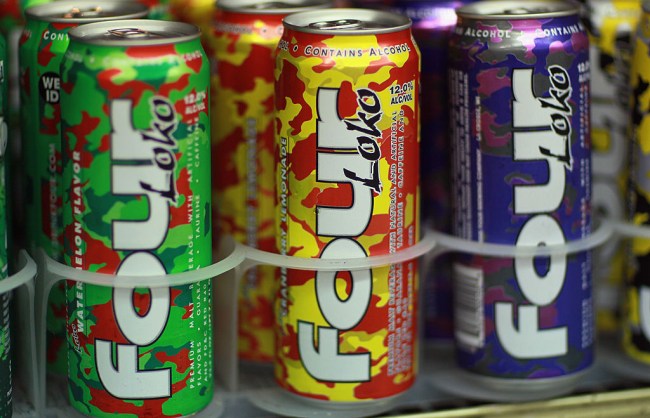 Virtually everyone who’s consumed alcohol has at least one type of drink they swear off forever after waking up one morning following a night they don’t remember only to discover they misplaced their wallet and their dignity at some point during their travels.

At least one study has shown tequila is the proud sponsor of bad decisions everywhere while another claims you’re setting yourself up for disaster if you mix vodka with Red Bull. However, if you happened to be in college around the start of the decade, there’s a very good chance there’s one drink in particular that makes you gag just thinking about it: Four Loko.

Four Loko first hit shelves in 2005 but it didn’t really blow up until the tail-end of the 2000s, which is when the impressively boozy, stimulant-filled malt beverage sparked a national panic after college students across the country discovered it was one of the cheapest and most efficient ways to drink irresponsibly.

Four Loko would end up being banned from multiple campuses and pulled from shelves at a number of prominent retailers and the company that makes it eventually agreed to reformulate the drink and remove the ingredients designed to perk people up.

Four Loko might no longer be in vogue but it’s doing what it can to pique people’s interest, and this year, they’ve decided to do that in the form of a brand new flavor that’s set to debut on 4/20 (which, as you may know, is the weed number).

According to Thrillist, this Saturday will see the introduction of hemp-flavored Four Loko, a drink that literally nobody asked for but which we’re getting anyway.

I thought it was an April Fools’ Day joke based on the date it was originally announced but it appears it is very real, and if you would like to try “the flavor people think of when they hear hemp”—which, at least for me, is grass clippings—you’re in luck.

It’s worth noting that despite tasting like hemp, the drink doesn’t contain any CBD or THC, so you’ll have to turn to your marijuana vehicle of choice if you’re looking to scratch that itch.