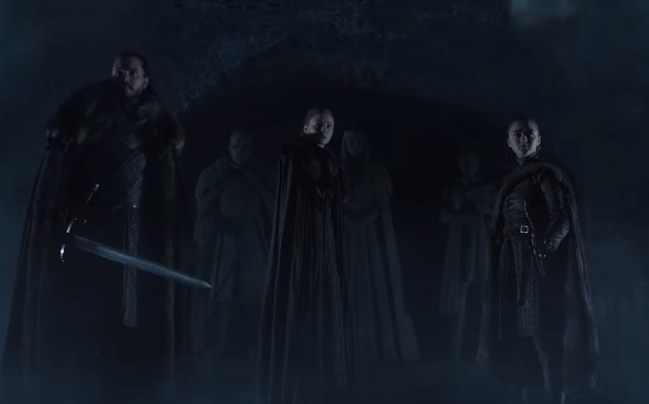 The ‘Crypts Of Winterfell’ trailer opens up with Jon Snow walking by torchlight below the, you guessed it, crypts of Winterfell where all of the great Starks were laid to rest. Then we get glimpses of his siblings Sansa and Arya while hearing a voiceover from the late Catelyn Stark, the former matriarch of the Stark family.

The Stark siblings then meet up and appear to find statues of themselves below the castle and it’s as if the statues were calling out to them to come down there. Jon’s torc then goes out and the characteristic ice of the white walkers appears. You can never let the fire go out, Jon, you know this.

I’m fairly shocked that this teaser ended with the premiere date (April 14) and not with Jon Snow or Sansa Stark waking up from a fever dream of some sort. The footage seems like something the showrunners will use but it’s hard to imagine how this footage will exist within the show without being part of a dream.

According to HBO’s press release, the ‘Crypts of Winterfell’ teaser was ‘directed by David Nutter who won an Emmy in 2015 for his work on the season five finale, “Mother’s Mercy.” It also includes an original score from Ramin Djawadi who won a 2018 Emmy award for his score of ‘The Dragon and the Wolf.’

JON AND ARYA PULLING OUT THEIR SWORDS AT THE SAME TIME IS MY NEW SEXUALITY https://t.co/HImBZD3Kr0

You laughed at my ‘Bran is the Night King because they have a similar facial structure’ theory for years but who feels ridiculous now. https://t.co/uQKe3sQuZo

Season 8 will be one hell of a ride. Kit Harrington (Jon Snow) recently teased that the season is designed to ‘break us’ fans. There are some crazy ass theories about Arya Stark’s fate and how she’ll affect the final season.

Here’s a look at the most recent gambling odds on who will win the Game of Thrones, in case that’s something you want to bet on with your friends.