‘Game Of Thrones’ Theory: Ned Stark’s Childhood Decided Jon Snow’s Name And The Meaning Behind It 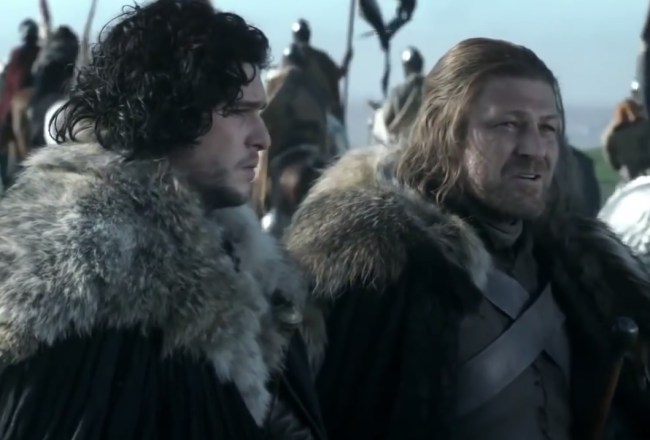 You know the deal, spoilers ahead. We officially received the news in the “Game of Thrones” Season 7 finale that Jon Snow’s real name is Aegon Targaryen. With the entire realm dead-set on murdering every Targaryen after the Mad King’s reign, Jon Snow sounded like a better name to avoid him being beheaded. All of the Stark’s male children were named after Eddard Stark’s friends and family. Robb is named after Robert Baratheon, Ned’s best friend; Bran after Brandon, Ned’s older brother; and Rickon after Rickard, Ned’s father. You may have already known that Ned Stark named Jon after Jon Arryn and his last name is Snow because that’s the last name given to all bastards in the North. But did you realize there was a hidden meaning to Jon Snow being named after Jon Arryn?

Jon Arryn was Lord of the Vale, Ned’s mentor and predecessor as Hand of the King. Ned loved Jon Arryn like a second father. Redditor duh_metrius points out the deeper meaning behind Jon’s name and the correlation it has to Eddard’s childhood.

Ned treated Jon like he was his own son. It also helped that Jon was a common and inconspicuous name, plus the name Aegon might raise a few eyebrows in the North.

Sorry, it appears that this is not how Ned named Jon Snow.

Ned: Sounds good to me.

Another example of George R.R. Martin putting hidden meaning into the names of his characters if Bran Stark. A Redditor named jlynn00 noticed this:

If you think about it, GRRM had to put in quite a bit of effort for the names, even for characters we never see. Bran is likely named after Ned’s brother Brandon, but Bran also means Raven in Welsh. He had to think that specifically on a broad scale.

The Redditor also points out that in Celtic languages, a crow is called “bran.”

With that much attention to small details, now we know why Martin hasn’t finished the “Winds of Winter” book.