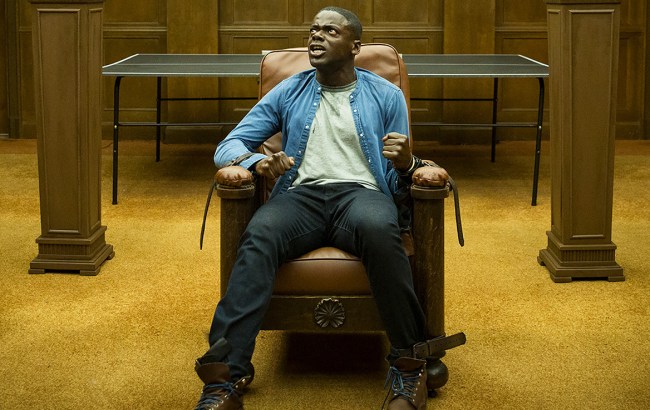 Back when the first trailer for Jordan Peele’s Get Out hit the internet, few, if any, expected the film to become the massive pop cultural and critical success it ultimately became.

Helmed by a first-time director who had previously been known for his work on the Comedy Central sketch-comedy series Key & Peele, Get Out scored four Academy Award nominations (Best Picture, Best Director, Best Actor for Daniel Kaluuya, and Best Original Screenplay, which it won) and was widely considered to be one of the best films of 2017. In the years since Get Out has also appeared on multiple “Best Movies of the 2010s” lists.

Get Out has recently added another massive credential to its legacy, as the Writers Guild of America has put the film at the top of their “101 Greatest Screenplays of the 21st Century (So Far).”

The WGA’s top ten list consists of nothing but heaters, as Eternal Sunshine of the Spotless Mind, The Social Network, Parasite, and No Country for Old Men round out the top five. Those five heavy-hitters are then followed by Moonlight, There Will Be Blood, Inglourious Basterds, Almost Famous, and Memento.

As for its writer and director Jordan Peele — who most recently helmed 2019’s similarly excellent Us — will release his third feature film, Nope, next summer. Nope reunites Peele with Kaluuya (who’s now an Oscar winner in his own right after taking home the prize for Best Supporting Actor earlier this year), and will also star Keke Palmer and Steven Yeun. At this time, not much is known about the project’s plot, but we’re expecting it to be a banger all the same.

If you’re curious, you can check out the WGA’s Top 10 Best Screenplays of the 21st Century below, and the full Top 100 here. And if you find yourself in the mood to watch Get Out, it’s currently streaming on Hulu.

3. The Social Network (2010)
Screenplay by Aaron Sorkin, Based Upon the Book The Accidental Billionaires by Ben Mezrich

5. No Country for Old Men (2007)
Written for the Screen by Joel Coen & Ethan Coen, Based on the Novel by Cormac McCarthy

7. There Will Be Blood (2007)
Screenplay by Paul Thomas Anderson, Based on the Novel Oil! by Upton Sinclair

10. Memento (2000)
Screenplay by Christopher Nolan, Based on the Short Story by Jonathan Nolan