Most Of Gloria Vanderbilt’s $200 Million Fortune Goes To Anderson Cooper, Her Other Son Gets Nothing In Her Will 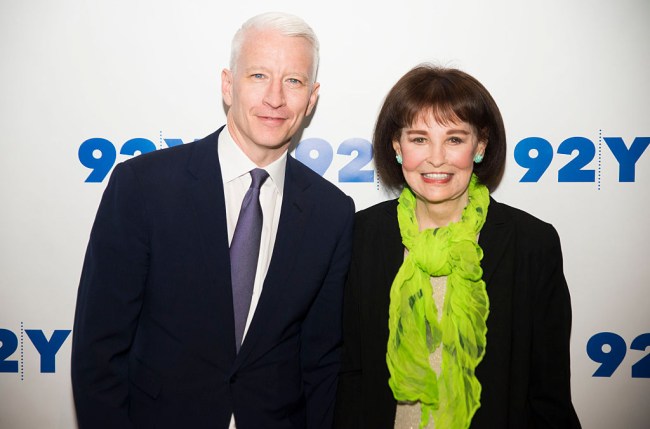 The heiress and socialite died on June 17 from stomach cancer at the age of 95. Gloria Vanderbilt was said to have a net worth of $200 million, although the exact amount has never been revealed. Gloria allegedly told her one son, CNN anchor Anderson Cooper, that there would be no trust fund.

In a 2014 interview on The Howard Stern Show, Cooper said: “My mom’s made clear to me that there’s no trust fund. There’s none of that.” But it seems as though Gloria had a change of heart because she is giving a huge portion of her vast wealth to Cooper.

According to multiple reports, Vanderbilt left a “vast majority” of her fortune to Anderson Cooper, her youngest son. The 52-year-old news personality is in no dire need of money since Anderson Cooper has a net worth of $100 million, and that is before the massive inheritance from his wealthy mother.

If Cooper does accept the huge inheritance, it will be much different from what he told Howard Stern in 2014. “I don’t believe in inheriting money. I think it’s an initiative sucker. I think it’s a curse,” Cooper said. “Who has inherited a lot of money that has gone on to do things in their own life? From the time I was growing up, if I felt that there was some pot of gold waiting for me, I don’t know that I would’ve been so motivated.”

Gloria’s oldest child, Leopold Stanislous Stokowski was gifted his late mother’s apartment in a co-op in Midtown Manhattan. But “all the rest” of her estate will go to Anderson Cooper according to Vanderbilt’s last will and testament.

Vanderbilt’s only other living child Christopher Stokowski will apparently receive nothing since he was not named in the will. Not much is known about the 67-year-old since he was estranged from the family decades ago.

One report states that “Christopher cut himself off from the rest of his family in 1978 and is said to have become a recluse, reportedly as the result of an incident regarding Vanderbilt’s therapist Christ Zois which affected Christopher’s relationship with his fiancée April Sandmeyer.”

Gloria had one other child, Carter Vanderbilt Cooper, who was Anderson’s brother and son of Wyatt Emory Cooper. On July 22, 1988, Carter committed suicide by jumping from the terrace of Vanderbilt’s 14th story apartment. Gloria Vanderbilt attempted to talk her then-23-year-old son off the ledge, but Carter still jumped to his death. Gloria never truly got over Carter’s death and said: “The worst is to lose a child.”

Cooper has paid many tributes to his mother, who was the heiress of the Vanderbilt Family and the great-great-granddaughter of American business magnate Commodore Cornelius Vanderbilt. “She was the strongest person I’ve ever met, but she wasn’t tough,” Cooper said. “She never developed a thick skin to protect herself from hurt.”

“She wanted to feel it all. She wanted to feel life’s pleasures, its pains as well. She trusted too freely, too completely, and suffered tremendous losses,” Cooper said of his mother. “But she always pressed on, always worked hard, always believed the best was yet to come. And she was always in love. In love with men, or with friends, or books and art, in love with her children, and her grandchildren, and then her great-grandchildren. Love is what she believed in more than anything.”