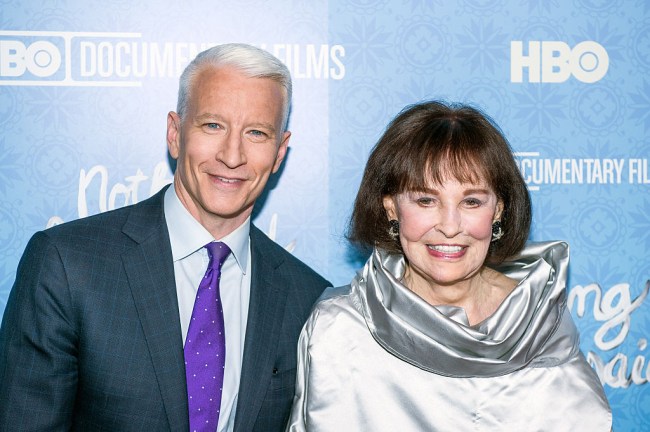 Gloria Vanderbilt died on Monday at the age of 95 after a battle with stomach cancer. She was a member of the esteemed Vanderbilt family of New York and the mother of CNN anchor Anderson Cooper. Gloria had a net worth of approximately $200 million, but Anderson Cooper probably won’t inherit the massive fortune of his mother, the Vanderbilt heiress.

Cornelius Vanderbilt was a titan of industry in the 1800s and acquired his extraordinary wealth with his railroad and shipping enterprises that helped build America’s infrastructure. Cornelius was one of the richest people in history and at the height of his success, Vanderbilt had a net worth of $202 billion when adjusted for inflation. USA Today placed Vanderbilt as the second richest American of all-time, only behind John D. Rockefeller and ahead of Walmart’s Sam Walton and Amazon’s Jeff Bezos.

Gloria Vanderbilt is the great-great-granddaughter of American business magnate Cornelius Vanderbilt. Gloria inherited a trust fund that was worth $5 million in 1925, which is approximately $70 million in today’s money. Gloria Vanderbilt was an actress and fashion designer, who made a name for herself in the 1970s with her own brand of form-fitting jeans. The Gloria Vanderbilt fashion line exploded and at the peak of popularity generated $100 million in a year.

Despite receiving an incredible inheritance herself, Gloria said that her son won’t receive her vast wealth. Cooper revealed that his socialite heiress mother told him that he wouldn’t receive a huge inheritance when she died in an interview on The Howard Stern Show from 2014.

In the end, after all else is stripped away, there is only love. My mom believed in love more than anyone. It was her guide, her solace, it’s what drove her, and in her final moments, it is what surrounded her. “i love you, you know that,” she would say to me, and i did, i knew it from the moment i was born, and i will know it till the moment i die. It was her greatest gift to me.

“My mom’s made clear to me that there’s no trust fund. There’s none of that,” Anderson told Howard Stern.

In my studio with @andersoncooper

Anderson defended his mother’s decision and pointed out how getting unearned wealth can be dangerous.

“I don’t believe in inheriting money,” Cooper said. “I think it’s an initiative sucker. I think it’s a curse. Who’s inherited a lot of money that has gone on to do things in their own life? From the time I was growing up, if I felt that there was some pot of gold waiting for me, I don’t know that I would’ve been so motivated.”

“We believe in working,” Cooper added. “She’s the coolest person I know. She really is.”

In a 2016 interview, Cooper said he was happy he didn’t have the last name of “Vanderbilt.” “That name Vanderbilt has such baggage with it, such history, and I’m very glad I don’t have that name, and my mom never felt much connection to the Vanderbilt family and I certainly didn’t,” Cooper said.

Anderson added that his mother once said: “One of the happiest days for my mom, she called me and said, ‘Somebody just referred to me as Anderson Cooper’s mom.’ Very happy that she’s reached that stage of life.”

Wyatt Cooper and me at the premiere of My Fair Lady in 1964. I was six months pregnant with our son, Carter, and was so in love and happy. The maternity dress was by #mainbocher. Photo by Getty Images

Cooper told Stern that he’s “doing fine on [his] own” and doesn’t need any more money. He’s not kidding, CNN pays Cooper $12 million a year. Anderson Cooper has a net worth of $110 million with two homes, one of which is in the Hamptons.

Love this photo of Anderson and me in my studio, with my favorite sneakers! @gloriavanderbiltstudio. Photo by #normanjeanroy

“Gloria Vanderbilt was an extraordinary woman, who loved life, and lived it on her own terms,” Anderson said of his late mother in a statement. “She was a painter, a writer, and designer but also a remarkable mother, wife, and friend. She was 95 years old, but ask anyone close to her, and they’d tell you, she was the youngest person they knew, the coolest, and most modern.”

RELATED: Elon Musk Gets Smashed On Twitter For Saying Artists Shouldn’t Be Credited For Their Work Online