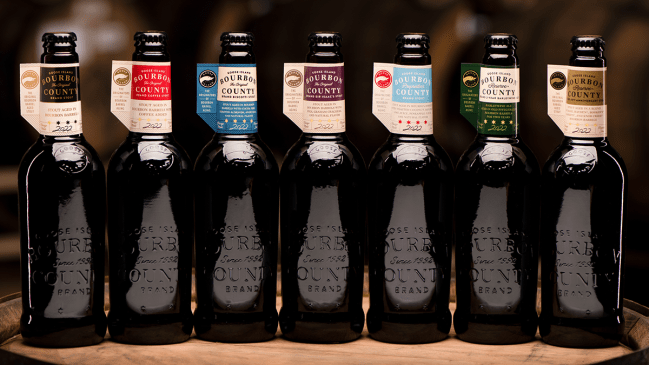 In 2010, the United States was home to around 1,800 breweries—a number that seems like a lot until you consider it’s risen to over 9,000 in the wake of the craft beer revolution that had been forming prior to the start of a decade that ushered in a new era defined by hoppy IPAs, adjunct-filled stouts, and an unprecedented abundance of choice.

The fact that America’s beer scene has arguably set the standard for the rest of the world is particularly impressive when you consider just how much of a laughing stock it once was; there were less than 100 breweries in the country when the industry hit its nadir in the late 1970s, almost all of which were dedicated to pumping out unremarkable, mass-produced brews that saddled producers across the U.S. with a stigma that took decades to shed.

While the recent Craft Beer Boom has played the biggest role in subverting that reputation, you can’t overlook the influence of the members of the Old Guard that laid the groundwork for that unprecedented explosion. The likes of Sierra Nevada, Bell’s, and Samuel Adams may have taken a backseat to the many, many new kids on the block, but every member of that second group is standing on the shoulder of the giants that comprise the first.

The same can be said for any brewery that prides itself on barrel-aged stouts, which weren’t even a thing until Chicago’s Goose Island got its hands on some used Jim Beam barrels in the early 1990s before introducing the world to its iconic Bourbon County Stout.

The beer commonly referred to as “BCS” remains one of the more anticipated annual releases on the craft beer calendar close to 30 years after the first batch debuted at its brewpub, and Goose Island has routinely tinkered with the many flavor variants that have been introduced over the years.

Fans of Bourbon County Stout will get the chance to reunite with some old favorites and say hello to a few newcomers that comprise the 2022 BCS roster that’s slated to roll out on Black Friday, which boasts the following seven offerings:

I was lucky enough to get the chance to taste each and every one of them ahead of the release, and while  I can safely say there’s a bad beer in the bunch, I still did what I could to rank all of them and provide my fellow aficionados with some (hopefully) helpful insight into what to expect. 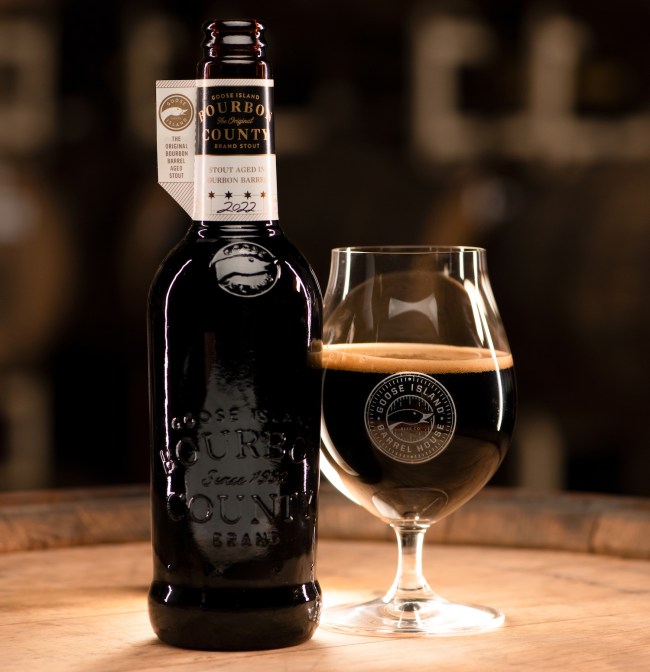 Someone had to come in last here, and the ever-reliable flagship basically ends up in the basement by default.

If you’re already familiar with BCS, you probably know what to expect by now. The 14.3% ABV brew is bursting with dark chocolate that’s complemented by notes of raisin and hints of vanilla.

It’s an undoubtedly sweet beer that doesn’t come close to wandering into avoid Cloying Territory, and while I’m hesitant to deploy “soy sauce” as a tasting note, I’m not sure how else to convey the subtle and slightly savory umami that lurks beneath the surface of every sip. 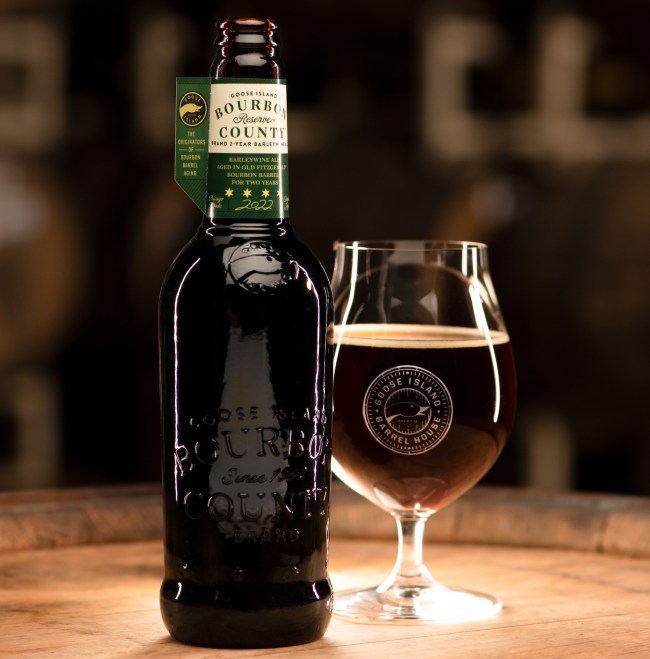 As you can probably surmise from the name, this bottle is a bit of an outlier when you consider it’s not actually home to a stout but rather the barleywine that earned a spot back in the BCS rotation after a four-year hiatus (I didn’t consciously ding it for departing from the norm when it came to firming up the ranking, but it makes me feel a bit better about placing it here).

That 2018 release was especially unconventional thanks to the coffee beans that were also used to add some extra flavor to the English-style ale that got the BCS treatment. However, Goose Island took a slightly more straightforward approach for the barleywine that got to know some barrels that previously housed 14-year, 16-year, and 17-year-old bourbon used for Old Fitzgerald’s vaunted Decanter series.

It took two years for this 17% ABV project to come to fruition, and the end result is a dark, malty brew where toffee takes centerstage along with a supporting cast featuring solid contributions from cherry and almond.

I don’t know if it was able to top the Sierra Nevada Bigfoot x E.H. Taylor collab from earlier this year, but it certainly comes close. 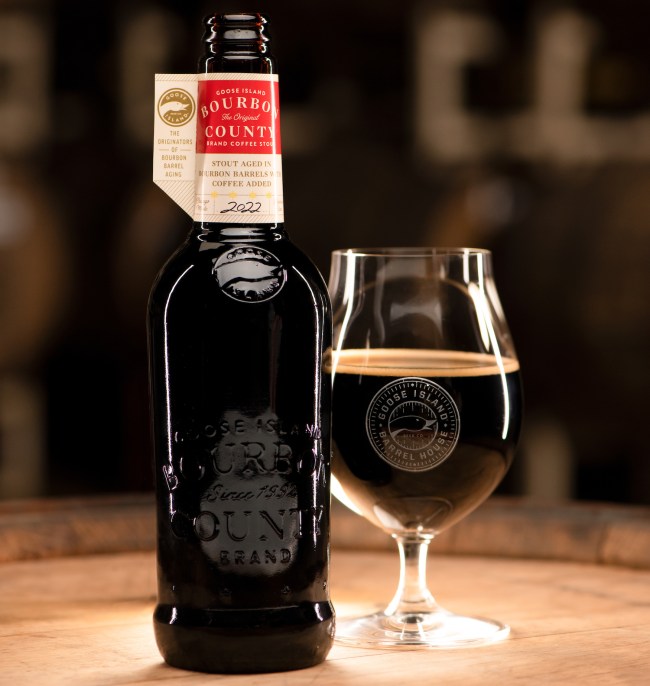 This fan-favorite has been on hiatus since 2017, and it’s only appropriate that it’s making its grand return at the end of what drink historians will likely remember as The Year of The Espresso Martini.

The ubiquity of coffee-flavored stouts makes it hard for any individual beer to rise above the rest, but Goose Island is certainly near the head of the pack when it comes to the breweries who’ve managed to perfect this particular style.

The brewers behind this 13.2% stout tasted a number of different beans from producers around the world before settling on a blend called “Turihamwe” sourced from Burundi due to its inherent sweetness. Coffee is obviously at the forefront along with flavors like “more coffee” and “even more coffee,” but there’s still a little bit of complexity thanks to the chocolate that serves as the perfect companion as well as a little bit of caramel to tie everything together. 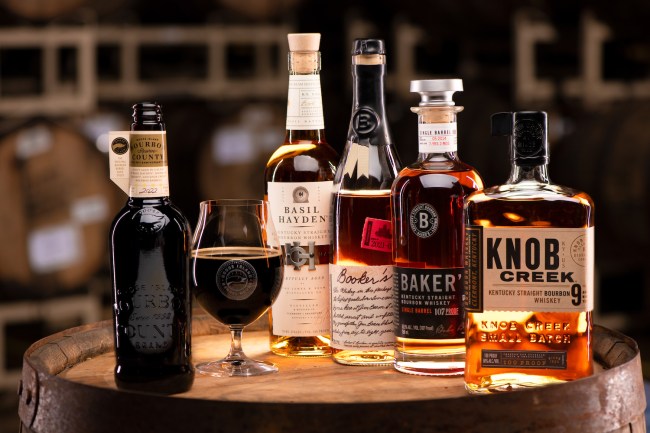 Goose Island went back to its roots to celebrate the 30th anniversary of the marriage that started it all, as barrels that were used to produce four of Jim Beam’s premium offerings—Basil Hayden, Baker’s, Booker’s, and Knob Creek—were all harnessed in the production of this year’s BCS “Reserve” variant.

This is essentially the same as the flagship BCS if all of the flavors were turned up to 11, which is really a testament to the expertise of the team that firmed up the final recipe by experimenting with various blends of beer from the four unique casks before settling on the ideal ratio.

If you like the standard Bourbon County Stout, then you’re probably going to love the 14.4% ABV option where all of those core components are significantly amplified (if you’re forced to choose between one of the two, this would obviously be my pick, but I’d highly recommend tasting them side-by-side if possible to really get the chance to appreciate it). 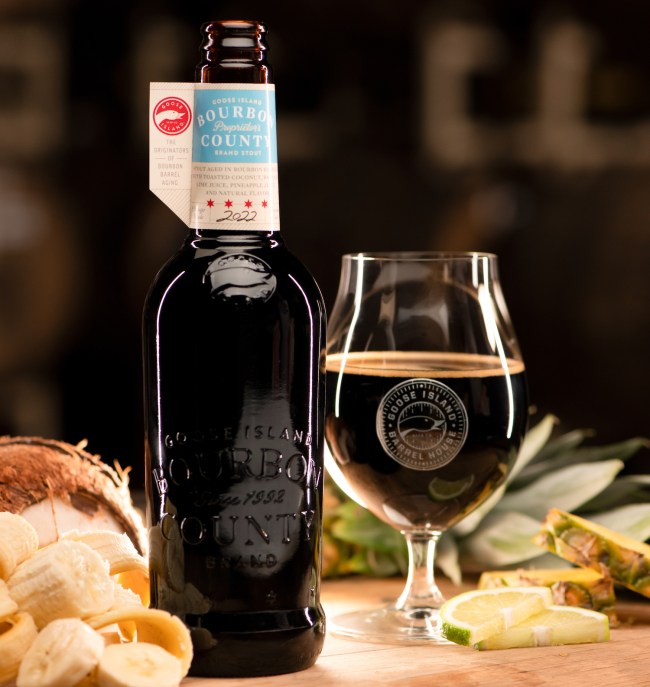 Every BCS release features a “Proprietor’s Stout” that’s only available in the Chicago area and typically boasts some fairly bold and unexpected flavor profiles—like the 2021 release that captured the essence of a strawberry shortcake ice cream bar, which remains one of the tastiest beers I’ve ever had the pleasure of trying.

This year is no exception, as the two brewers who dreamed up the recipe set aside an evening to visit cocktail bars around the city in search of some inspiration before finding it in the form of a Jungle Bird, a tropical concoction made with dark rum, Campari, simple syrup, and lime and pineapple juice.

That duo decided to go all in on the island theme by throwing coconut and banana into the mix, which resulted in the creation of a textbook example of a beer that really has no business working as well as it does thanks to the successfully unconventional combination of flavors I can’t say I’ve seen together in a stout prior to this. 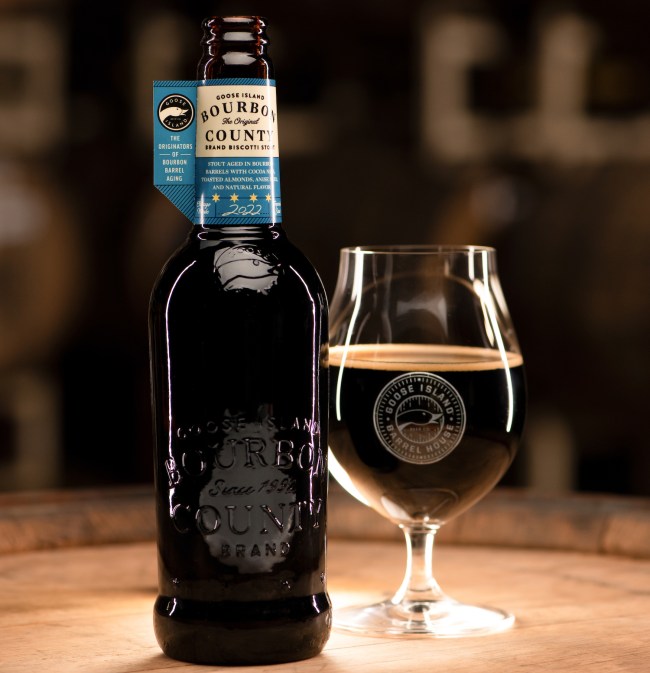 The three beers that earned a spot on this year’s podium were all the result of an internal contest Goose Island conducts ahead of each BCS release to give its employees a chance to play around with various flavors and present them to the panel that votes to determine which ones deserve to be produced on a larger scale.

The silver medal winner was dreamed up by a member of the human resources team who attempted to capture the essence of chocolate-covered biscotti, and it’s safe to say they nailed it.

The beer is bursting with cocoa and almond, and while I’m typically averse to the black licorice flavor imparted by the anise that’s commonly used in Italian baked goods, I was not only able to tolerate it but actually enjoyed it, which is certainly no small feat. 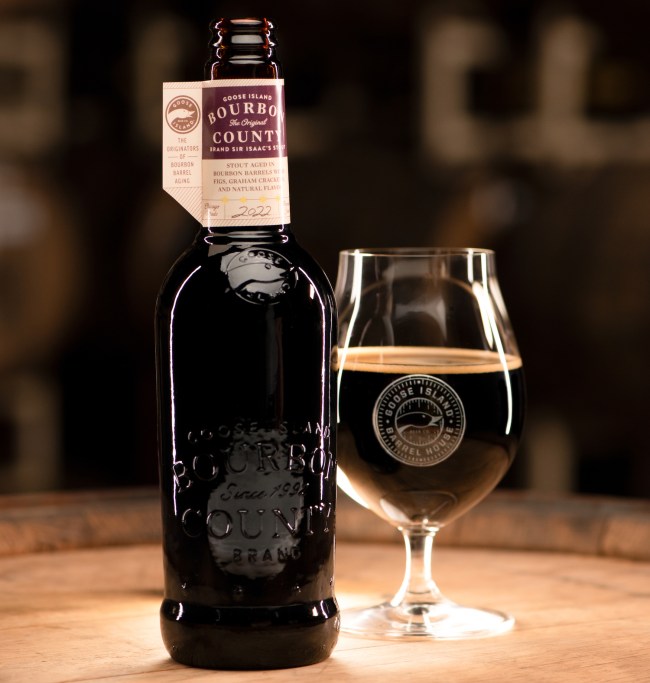 The star of this year’s BCS lineup was also the one that intrigued me the most heading into the tasting, as the beer Goose Island isn’t legally allowed to say is inspired by a Fig Newton promised a profile bursting with fig and graham cracker.

The variant officially dubbed “Sir Isaac” was a bit of an undertaking, as it required the brewery to track down 10,000 pounds of Mission figs (which, much to the chagrin of the brewers tasked with preparing the batch, were packaged in 5 lb. bags).

However, it was more than worth the effort, as this beer transforms a beloved childhood treat into an arguably more delicious adult beverage.

While Sir Isaac may be the standout, I don’t think you’ll be disappointed with any of the bottles that will hit shelves on November 25th.