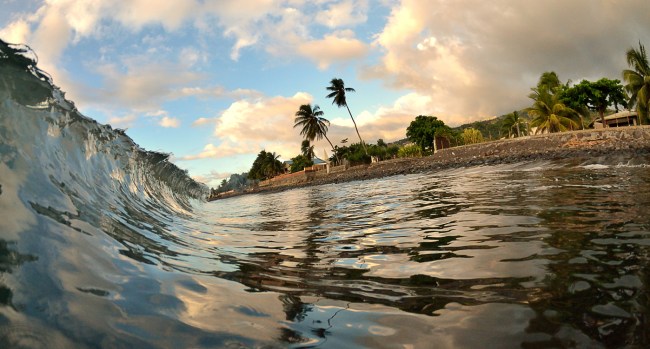 A 7-year-old boy wiped out while surfing, but it wasn’t because of his inexperience, it was because he was knocked down by a shark.

Young Chandler Moore was surfing in New Smyrna Beach, Florida, this week when he literally jumped the shark. The 7-year-old boy was knocked off his surfboard by a shark, and the scary moment was caught on video.

Chandler didn’t know what pushed him off his surfboard until he watched the video from his GoPro camera that was mounted on the front of his surfboard. The footage revealed that the young surfer had a close encounter with a shark.

“What’s funny is, we didn’t even know that was a shark until we had come back in,” said Chandler’s dad Shaun Moore. “We surfed for another half hour after that.”

“He said he saw a fish — and I guess that startled him,” said Shaun, who lives an hour inland at Orlando.

🦈🏄‍♂️A boy encountered a shark while surfing near a Florida beach, Saturday, November 30.
The footage of Chandler Moore, 7, surfing before clashing with a small shark was captured on a GoPro camera. (Reuters) pic.twitter.com/D76jQfYWcg

The Moores believe the shark was a blacktip, which is common to the area.

Shaun, who is a former professional wakeboarder, said Chandler has been surfing since he was only 4-years-old and the shark didn’t bother him one bit. “It didn’t phase him at all,” the proud papa boasted. “He’s a little daredevil.”

“If the waves are good, a couple sharks aren’t gonna scare anyone off,” Shaun said of the surfers at New Smyrna Beach.

If New Smyrna Beach sounds familiar, it is because we’ve posted about the coastal town quite often because it is the “Shark Attack Capital of the World.”

According to the University of Florida’s International Shark Attack File, there were 88 unprovoked shark attacks in the world in 2017, 53 of which were in the United States. There were 31 attacks in Florida, 14 of which happened in Volusia County, where New Smyrna Beach is located.

In August, three people were bitten by sharks within 24 hours at New Smyrna Beach.

Also in August, a dad captured drone video of a shark swimming towards his children in the water at New Smyrna Beach. He sprinted and yelled for his kids to get out of the water, and they were able to get out of the Atlantic Ocean before the shark could reach them.