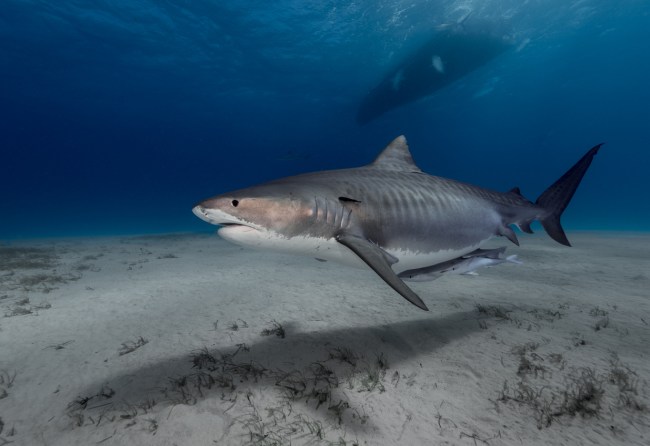 What were you doing when you were 8-years-old? Having a Nerf war in the backyard? Well, this 8-year-old kid is out here reeling in massive 700-pound sharks and breaking records.

Jonathan Millauro took his 8-year-old son Jayden out fishing last week and made a catch of a lifetime. The father and son went fishing off the coast of Australia on the 24-foot boat named The Undertaker, captained by Ibby Dardas.

The Undertaker was about 100 miles south of Sydney when the massive shark was spotted near the boat. “It was rainy and the seas were rough,” Jonathan said. “We spotted the shark as it came up to the back of the boat.”

Jayden Millauro showed no fear as he tried to hook the enormous beast. “The adrenalin was pumping from the moment we all spotted the shark at the boat,” the proud papa said. “So Jayden grabs the rod, we harnessed him up.”

The 88-pound 8-year-old boy was able to reel in the 10-foot-long shark that weighed nearly 700 pounds. “I was trying to hold myself, by pushing off the wall in the boat,” Jayden explained.

“I was thinking that I hope the crew can (get) the shark (on the boat) because I don’t want to lose it,” Jayden said. “I was really excited when they got it.”

The tiger shark that Jayden caught weighed in at 692 pounds, breaking the International Game Fish Association’s ‘small fry’ record that was set in 1997.

Jayden, who is the youngest member of the Port Hacking Game Fishing Club in New South Wales, Australia, has been fishing since he could walk.

How cruel is it for Jayden, he enjoys his greatest fishing experience at 8-years-old and now for the rest of his life, every fishing trip will be a disappointment compared to this incredible catch.

Most eight-year-olds who go fishing are happy to catch a flathead, but young Jayden Millauro hooked something much bigger off the coast of Sydney… a massive Tiger Shark. @DaltsWorld #9News pic.twitter.com/LHX0c3MzvH