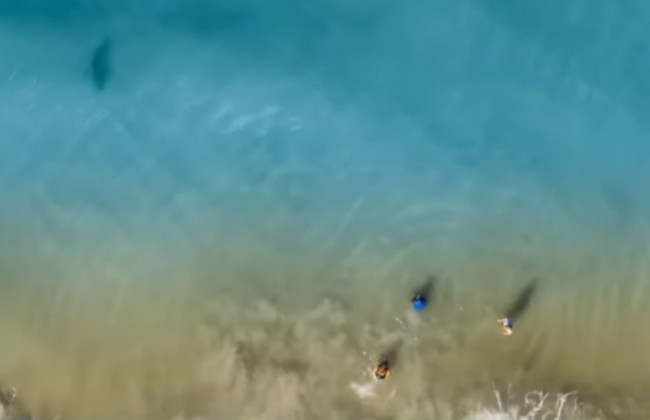 A dad was trying to snap some cool drone photos of his kids frolicking in the water, but then caught a glimpse of a large shark swimming towards his small children. This potential shark attack happened in the shark-bite capital of the world.

New Smyrna Beach in Volusia County on the Atlantic coast of Florida is less than 30 minutes south of Daytona Beach. It is known as the shark-bite capital of the world and one panicked father found out first-hand on how often sharks are in those warm Florida waters.

Dan Watson was enjoying his time at New Smyrna Beach with his family and capturing the precious moments with a drone. Watson, who is a professional photographer, was snapping photos ith his DJI Mavic 2 Pro of his three kids playing in the water. The next thing he knows is that there is a large shark only feet away from his children.

The aerial photos exposed a dark shadow of a huge shark lurking in the water and approaching his kids. “As soon as I got it into the air, I started seeing a shadow moving through the water right towards them,” he told Fox News.

Dan and his wife Sally immediately ran towards their children and screaming for their kids and everyone on the beach to get out of the water.

“He showed me the frame on the drone and you see that shark swimming right at our kids — it was terrifying,” Sally Watson said.

Dan posted the scary photos on his Instagram with the caption: “See that dark shadow making its way straight for the shore & those people? That was my view this weekend while flying my Mavic 2 Pro… and oh, 3 of those people are my kids! Definitely too close of an encounter for my liking!”

Watson added that he will probably bring his drone to every family beach day. That is a sage decision since New Smyrna Beach in Volusia County is the shark-bite capital of the world.

Volusia County has had 303 shark attacks since 1882 according to the ISAF. New Smyrna Beach has had more shark incidents per square mile than on any other beach in the world and there are estimates that if you’ve spent any time swimming in the Atlantic Ocean off the coast of New Smyrna Beach, you’ve probably have been within 10 feet of a shark.

There isn’t necessarily more sharks in the waters off New Smyrna Beach, but there are more surfers. New Smyrna Beach is consistently named as the best place to surf in Florida. More people in the water, more opportunities for shark attacks. The 13 miles of white sandy beaches at New Smyrna Beach that are an hour east of Orlando also attract a ton of tourists, more bait in the water for the sharks.

At 4:30 PM on Sunday, an 18-year-old surfer was bitten on the foot by a shark at New Smyrna Beach Inlet. The surfer suffered minor lacerations. Witnesses said that nobody saw the shark coming. They need to get a drone.