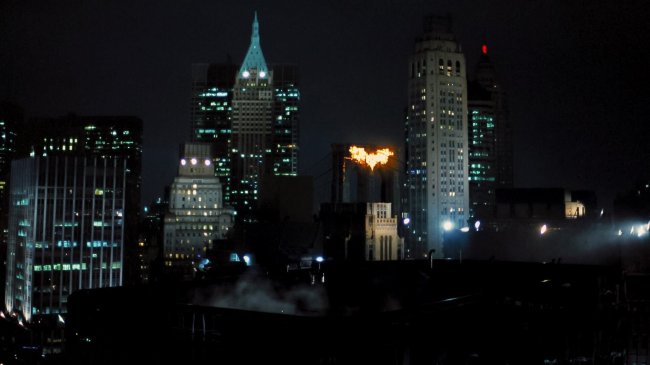 Would you live in a three-bedroom apartment in Gotham City that costs $300 per month? That’s the question posed by a recent viral tweet that’s making the rounds on social media.

Here’s my view of the hypothetical, in case you’re interested: in the market suggested by this tweet, you could easily live in one of Gotham’s finest buildings on a regular salary. We’re talking penthouse at Wayne Tower type stuff.

Sure the risk is a bit higher but these supervillainous MFs seem more concerned with killing Batman than me. The fact of the matter is you can get hit by a bus in any city: life is guaranteed to no one regardless of the concrete jungle you reside in.

A 21-bedroom “apartment” for $2100 a month?! That’s less than I’m paying for a studio apartment right now. Bruce Wayne would be my neighbor — I’d be safe as hell! We become homies, tell him to tell Selina to bring a friend. So, yes, absolutely I’d make that move and hope for the best. At the very least, I’ll have a hell of a story to tell in heaven.

I seem to be in the minority, though, as a majority of the people who hilariously reacted to the tweet indicated that Gotham City would be the last place they’d want to settle down.

When your reporting for Gotham City and see Joker terrorising the streets https://t.co/iWnP7Lo62i pic.twitter.com/M7yrDLzeRE

me waking up to a message from riddler

Me after having to evacuate my apartment because my neighbors start uncontrollably laughing for the 100th time https://t.co/KOlnVu02Ah pic.twitter.com/Zepz5RgQ4A

Me coming out of the rubble after Batman used my crib as a shortcut pic.twitter.com/il3uyy0CWp https://t.co/X1U4HS8cYr

me watching batman beat up an old lady for going 3 above the speed limit https://t.co/1uQy6zz8ao pic.twitter.com/rI2t4obBTm

Me when Joker holding me off Gotham Bridge cuz I tweeted I seen the Batman https://t.co/amEAopHyqF pic.twitter.com/j0l15QCEcq

Me when Batman interrogates me because I sent a “?” in response to my friend’s text https://t.co/SlrqExJvqV pic.twitter.com/ok1O6puNJJ

Batman after i park in the handicapped spot https://t.co/NZvvCQggPP pic.twitter.com/P8lPjLfiEo

Me after Mr. Freeze attacks Gotham in the Summer https://t.co/5Od8jqAsAQ pic.twitter.com/AWRzvVA59P

batman after i finish telling him about me beating harley's doonies down the night before https://t.co/Uz7F1wMgYy pic.twitter.com/FqTmFXfY25

me trying to work while the riddler floods the city pic.twitter.com/UGkKpliqqc https://t.co/uTGL3H3HXn

Batman when he saves my ass but smells weed on me https://t.co/iWnP7Lo62i pic.twitter.com/UM1hrYYRW3

Me waking up after scarecrow fear gassed the whole apartment complex https://t.co/7Cb15RPMaC pic.twitter.com/2IVHSf1aQt

When you’re trying to get food and Penguin shows up pic.twitter.com/muwqGRcOUR https://t.co/QgueTxLCiv

That said, if I did wind up calling Gotham City home, I’d certainly hope for a more Ben Affleck-type Batman than a Robert Pattinson Batman, or hell, even a Christian Bale Batman. If Gotham is going to be protected by a superhero, I want one that can go toe-to-toe with that boy scout over in Metropolis.