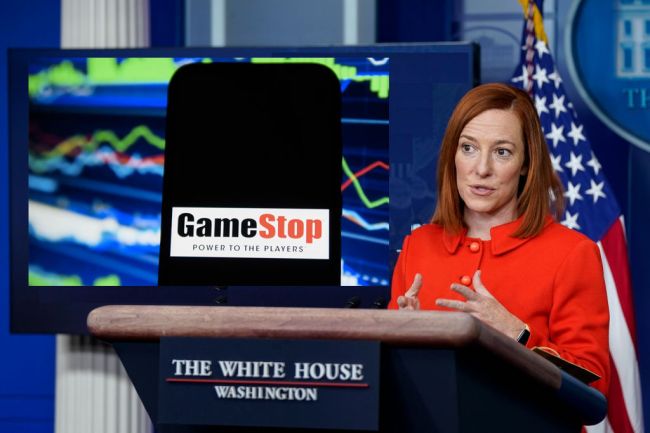 Hoooo buddy. Let me just say this from the jump: I do not understand #stonks. Never have. Sure, I hope to wrap my head around them one day, but for now, I’m a 27-year-old pop culture writer just living in the now, knowing what I know and what I don’t. And while I don’t know jack shit about stocks, I do know about memes, and that’s why this truly bewildering GameStop (or GameStonk, as Elon Musk dubbed it) story has caught my attention: the phenomenon is being referred to as Meme Stocks.

Luckily for both of us, co-worker Connor put together an awesome explainer of the whole thing if you want to dive a little deeper. But in case you haven’t been caught up yet, the long-story-short is this: a bunch of Redditors in the r/Wallstreetbets subreddit have essentially given some Wall Street Big Wigs a taste of their own medicine. If you want something even simpler than an article, then here’s the explanation I received via Slack: 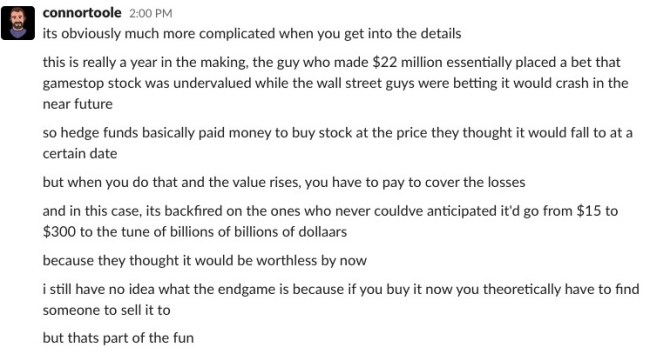 The GameStonk phenomenon has quite obviously spilled over into the mainstream, as not only are various websites outside of the stock industry writing about it, but the United States government has officially responded to the internet-based, meme-driven events. 2021, man, off to a flyer.

My first question was, well, why would any of this be any of the government’s business? And the reason is, now that they’re unified in thinking, strategy, and execution, r/Wallstreetbets is basically a hedge fund without any of the SEC licensing, which is frankly — to a layman like myself — fucking hilarious.

RELATED: Honestly, Can We Bring Back GameStops? Because Downloading Video Games SUCKS

The reaction on said subreddit has obviously been just enjoyable, as the newly empowered day traders are tossing out phrases like “We are the captains now,” “Have no fear, GME gang. We are consolidating in preparation for tomorrow’s moon landing,” and “GME — it never has to end.” Again, maybe because 2020 has melted my mind into absolute mush, but there’s just something deeply hilarious about a bunch of anonymous Redditors coalescing to make a stand again Wall Street Suits with the fucking GAMESTOP STOCK as their weapon of choice. And if that, my friends, isn’t a meme, then what is?

Now that their GameStop gamble has cashed in, Reddit has turned their attention to AMC (the struggling movie theater chain), so keep your eyes on that because the Meme Stock Saga is far from over.