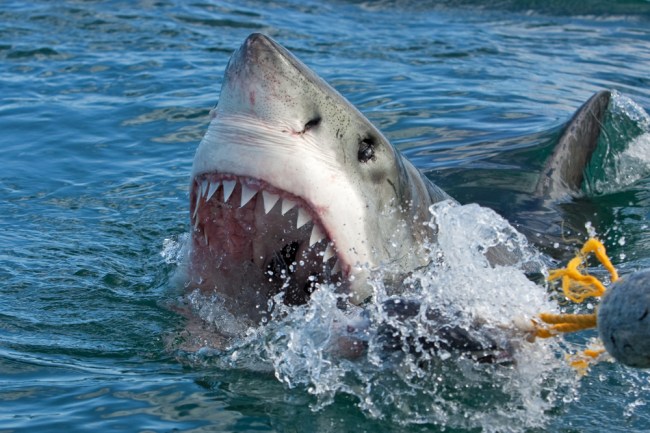 Great White Sharks are awesome. They’re some of the most awe-inspiring creatures in the ocean. They’re also the most iconic species of shark on the planet thanks to movies like Jaws and SCUBA diving encounters like the ones below.

On Monday, I shared this clip with you bros of a SCUBA diver in South Africa who was just checking out a reef when a MASSIVE Great White Shark popped up out of nowhere and buzzed his head and gave him a haircut. That encounter took place outside of the shark cage, this one below is interesting because the divers have the cage as a protective barrier between them and the shark, or so they believe.

These Great White Sharks which come close to the diving cages will often bump the cages and get close because they know someone on the boat will toss them a piece of fish. It all makes a great home video for the customer, but it’s pretty darn rare that you see a shark take it to the next level like this.

I’m sure the divers inside of that cage were literally dropping logs inside of their wetsuits when that Great White Shark latched onto the buoy and refused to let go. At the very least they were whizzing in their trunks because the water’s frigid. Either way, there was some panic taking place and people were losing control of their bodies. This I’d bet on.

I haven’t had the chance to experience one of these Great White Shark dive encounterers yet in life but this is 100% on my bucket list. More realistically, I’d love to take a trip to S. Africa or Mexico and do this sometime in the next year or two so if any of you bros have recommendations hit me up on Twitter at @casspa.