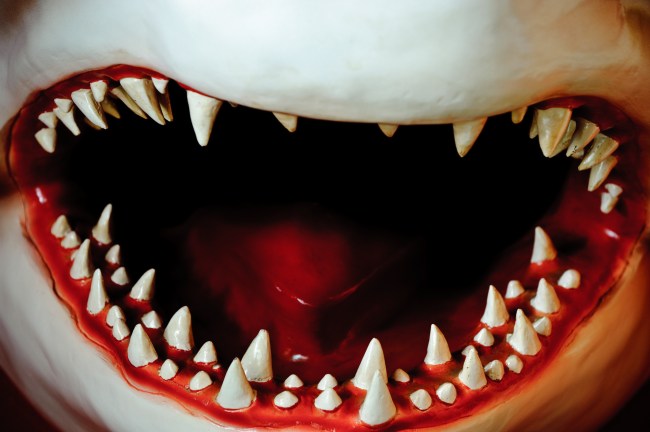 An estimated 15-to-17-foot Great White Shark was filmed in the Florida Keys this week by Captain Carter Bates and his girlfriend. They filmed the massive Great White Shark as it practically invited itself into their boat as it ripped a chum bag to shreds that was hanging off the side.

I’ve lived in Florida for most of my life. I was in NYC for close to a decade but I was born and raised in Florida and moved back here after I left New York. Never in my life have I seen a Great White Shark in the Sunshine State.

I know they’re here because I see videos of them pop up on social media. There’s also a shark tracker on Twitter which pings tagged Great White sharks as they migrate up and down the coast and I see as they pop up on Florida’s east coast. But it’s still pretty impossible for me to wrap my mind around the fact that one of these sharks could be swimming just a few miles away from where I’m sitting right now.

The teeth on this shark are NUTS:

According to For The Win, Capt. Bates was snapper fishing that morning in ~100-feet of water and using the chum bag to draw the fish up on the water column and off the rocky reef bottom of the ocean floor. They say this shark circled their boat for THREE HOURS before it worked up the balls to attack that chum bag and rip it to shreds.

I don’t know about you guys, but unless I’m in a VERY secure boat I’m probably going to move fishing spots if I’m being circled by a 17-foot Great White Shark for three hours. There’s an infinite number of good snapper fishing spots in the Florida Keys and it would’ve taken them no time at all to move on.