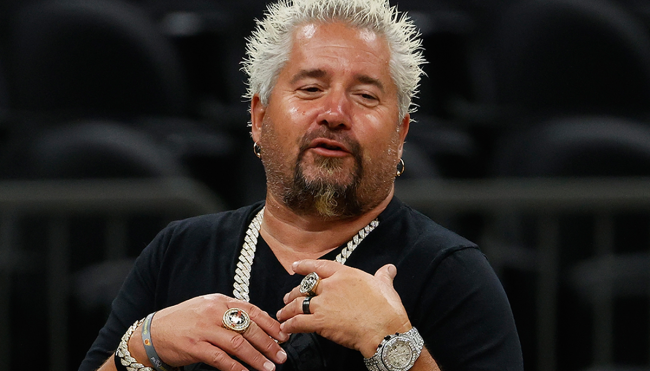 It’s safe to say Guy Fieri lived up to the title bestowed upon him when he was dubbed the “Next Food Network Star” in 2006, and following a wild 15-year journey that saw one of the most ridiculed figures in the food industry transform into one of the most beloved, he secured a gargantuan bag when he signed a new contract with the channel that made him famous that will make him $80 million richer over the next three years.

It didn’t take very long for the chef to continue his long tradition of being a pretty awesome dude by hooking up the staff at a Miami restaurant with the $5,000 tip he left behind during a visit (which is a drop in the bucket compared to the more than $25 million he helped raised to come to the aid of hospitality industry workers impacted by the pandemic).

Now, according to The Press Democrat, the Mayor of Flavortown has been kind enough to provide me with the chance to type a sentence I never thought I’d get the chance to write, as the outlet reports Guy Fieri dropped at least $30,000 on pigs during an auction near his home in Santa Rosa, California last weekend.

One more time: Guy Fieri dropped at least $30,000 on pigs during an auction.

Fieri apparently decided to check out the festivities after he received a letter from a student belonging to a local branch of the Future Farmers of America who urged him to stop by the livestock auction that was held at the Sonoma County Fair last weekend. The chef recruited a few friends to join him, and they collectively placed the winning bid on 16 different pigs—including one Fieri bought for $10,000—that will all be donated to local charities.