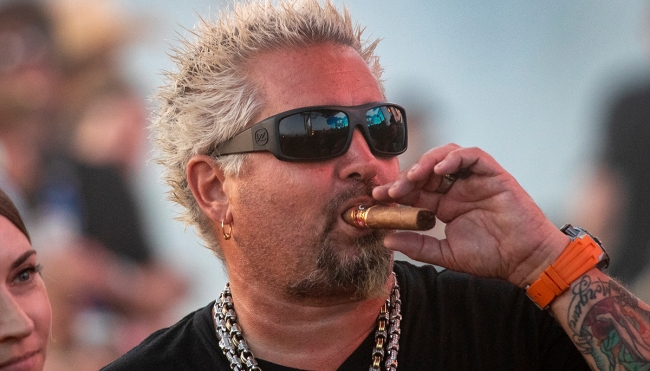 There are a number of factors you can point to that have played a role in the impressive reinvention of Guy Fieri, a man who long served as a punching bag for the Serious Culinary Types who tried to make him the laughing stock of the industry before being treated to a dramatic shift in public perception that’s made him one of the most beloved celebrities on the planet.

One major reason is the many stories that have painted Guy as a genuinely good, well, guy. That includes his efforts to support bar and restaurant workers impacted by the pandemic and the multiple occasions where he’s shown up to command centers in California with a massive grill in tow to feed emergency responders on the frontline of wildfires.

You also can’t overlook the impact of the viral set Shane Torres performed on Conan in 2017 where he took it upon himself to defend the honor of the Mayor of Flavortown and took aim at his haters by saying, “People s—t on that dude all the time, and as far as I can tell, all he ever did was follow his dream.”

It’s safe to say that strategy has worked out pretty well for Fieri, who inked an $80 million contract with Food Network last year that will allow him to keep living his best life.

Fieri seemed to be doing exactly that on Wednesday night, as he was in attendance at Rocket Mortgage FieldHouse when Rage Against the Machine stopped by Cleveland for a concert with Run the Jewels.

It would appear Fieri got the V.I.P. treatment he deserved, as he was captured rocking out behind the soundboard with a drink in one hand and a cigar in the other while the legendary band performed” Bombtrack.”

It’s Guy Fieri’s world and the rest of us are just living in it.