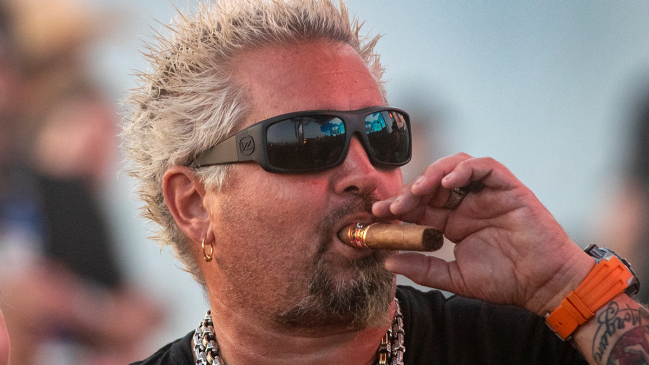 It’s hard to imagine there are still any genuine Guy Fieri haters in the world based on the dramatic reinvention the celebrity chef had undergone in recent years while repeatedly proving he is the consummate example of A Guy Being A Dude.

The culinary sensation has not only routinely leveraged his success to make the world a better place but has pounced on the opportunity to live his best life, whether it involves partying with Julian Edelman in a luxury suite at the Super Bowl, casually whipping up food for Al Pacino, and rocking out while following Rage Against the Machine across the country.

While Diners, Drive-Ins, and Dives has been repeatedly (and criminally) snubbed at the Emmy Awards, Fieri did earn a pretty cool honor in 2019 when he received a star on the Hollywood Walk of Fame during a ceremony where Matthew McConaughey served as the keynote speaker.

The occasion gave Fieri a great excuse to celebrate—and as we recently learned, he opted to commemorate the achievement in the most on-brand way possible.

The Mayor of Flavortown recently recounted that day during an interview with Variety where he shed some more light on the post-ceremony festivities, saying:

“They said, ‘Where do you want to have your luncheon after your star?’

And I said, ‘What’s a luncheon? I don’t want a f—king luncheon. I want a rager. I want a kegger.’ I said, ‘Let’s do something big. I’m really serious.’

What do you do after the network throws you the greatest party and all your buddies are there and Foreigner plays and it starts to rain? Well, you load up 10 of your best friends and drive to the tattoo shop and you all get star tattoos.

I think I’m probably the only person who got a star and went to get a tattoo for it.”