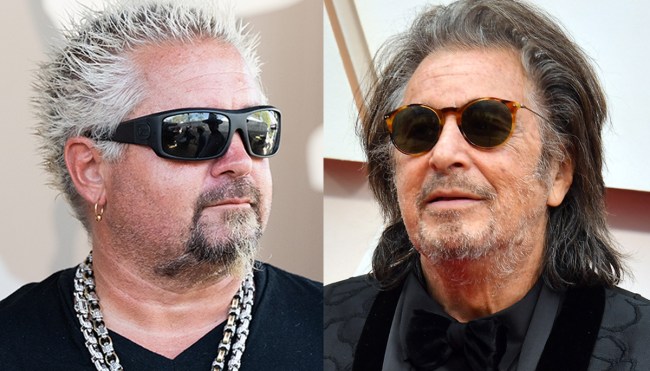 The celebrity news cycle is filled with stories that make it easier to tell yourself you have more in common with rich and famous people than you might think; Chris Evans refusing to upgrade from his iPhone 6S until earlier this year and an NHL player who couldn’t figure out how to watch his own team play while stuck in a hotel room are two fairly recent examples that pop to mind.

With that said, those anecdotes tend to be outnumbered by the many, many, many others out there that make it very clear the stars are not, in fact, just like us.

There aren’t many things that make me realize that’s the case quite like stumbling across a picture or video of a seemingly random collection of celebrities hanging out with each other in their free time—like when Antonio Brown chilled on a couch directly next to Floyd Mayweather Jr., Madonna, and Kanye West earlier this year and Aaron Rodgers spent a good chunk of a Hawaiian vacation broing down with Miles Teller.

However, there is not a single moment I wish I could’ve been a fly on the wall to witness quite like what unfolded in 2020 when Syvellster Stallone threw a party at his house with a guest list that included Arnold Schwarzenegger, Sugar Ray Leonard, and Al Pacino.

However, I’d argue none of the names of the people in attendance are more notable than the one and only Guy Fieri, and Stallone was kind enough to pull out his phone to record himself introducing the Mayor of Flavortown to Pacino for the first time.

Fieri—a man who counts Matthew McConaughey and Vanilla Ice among his closest friends—admitted he was a bit intimidated by the idea of having to cook for the legendary actor during a recent interview with Entertainment Tonight. However, it all worked out for the best—especially when you consider the incredibly on-brand reaction Pacino had when he took a bite:

“You hope that you’re gonna meet the legend and legend’s gonna be as great as he is. And he sits down and he takes a couple bites and I’m just looking at him, like, I’ve never been more nervous.

“He goes puts his hands on the counter he pushes back the chair and he goes, ‘Hoo ah! And I go outside, I’m like ‘Did you see that?!'”