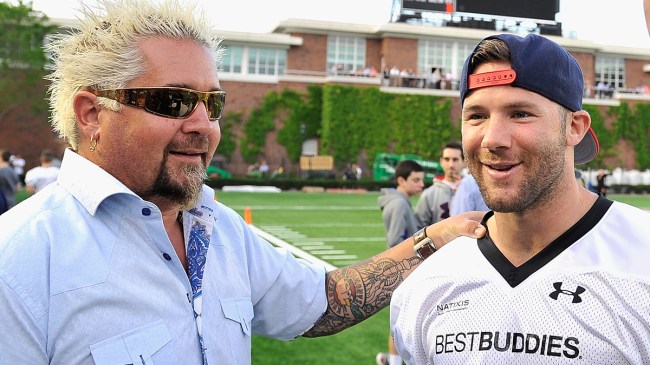 It’s not exactly shocking that celebrities have a tendency to cross paths with and gravitate toward other people whose lives are defined by a level of fame and fortune the Average Joe can only dream of.

The intersection of those particular social circles can lead to some seemingly unlikely friendships being formed—like the series of events that led to Aaron Rodgers chilling with Miles Teller in Hawaii last year.

However, that bromance has nothing on the relationship former Patriots wide receiver Julian Edelman forged during his time in New England, as the Deceptively Athletic wideout is apparently pretty tight with the man, the myth, and the legend who is Guy Fieri.

That revelation surfaced when Edelman conducted an AMA on Reddit on Thursday where he addressed a wide variety of topics, which included an amazing story about how his friendship with the Mayor of Flavortown (which like stemmed from their work with the Best Buddies program) led to him getting kicked out of a luxury box at Super Bowl LII.

Edelman became very well acquainted with the Super Bowl over the course of a 12-year NFL career where he appeared in The Big Game four times and raised the Lombardi Trophy on three separate occasions (one of which was supplemented by the MVP award he earned for his performance in Super Bowl LIII).

Unfortunately, he wasn’t able to contribute when the Patriots faced off against the Eagles in Super Bowl LII due to the ACL injury that kept him sidelined for the entire season. However, that didn’t stop him from making the trek to Indianapolis, where he got the chance to watch them lose to Philadelphia in style after Fieri hooked him up with a ticket to a luxury box inside Lucas Oil Stadium.

Edelman pled ignorance when someone asked if he knew the real explanation for Bill Belichick’s infamous decision to bench Malcolm Butler, saying “I was too busy getting kicked out of the Colts box with Guy Fieri.” That obviously led to a ton of people wanting more details, and he was thankfully happy to oblige:

Guy had some tickets in the Colts box (oh, we’re friends nbd).

Got settled, got my popcorn got my cracker jacks, telling old war stories to the lovely folks in the box. Then I get a tap on the shoulder. Colts management found out I was there, and let’s just say Indy isn’t known for its hospitality.

Thank god there was a Pats fan with a box next door.

I think we can all relate to that.