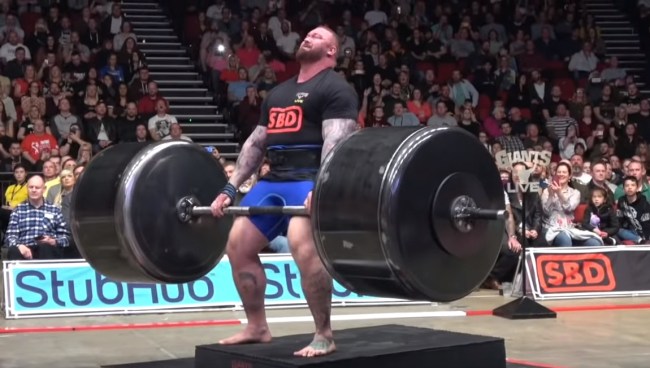 As a 6′ 10″ freak of nature, there aren’t many people who are capable of making me feel small but that’s exactly what Hafthor Bjornsson—better known as The Mountain from Game of Thrones—did when I chatted with him a few months back.

We talked plenty of Thrones during our sitdown but I also got some insight into what it takes to become the World’s Strongest Man, which includes an absolutely absurd training regimen in addition to a diet that would test the gastric fortitude of virtually everyone on the planet.

In addition to winning multiple strongman titles and landing a role on the biggest show on television, Bjornsson has broken his own deadlifting record multiple times over the past year or so.

However, according to ESPN, it appears there’s one secret ingredient in his recipe for success that he neglected to mention: steroids.

On Sunday installment of E:60, the outlet aired an interview they conducted with Bjornsson a couple of years ago in which he admitted he’d taken performance-enhancing drugs at some point, saying:

“Yes, I have. When you want to be the best, you do whatever it takes.”

Bjornsson deflected questions concerning the frequency of his steroid use and whether or not he continues to take PEDs but it’s worth noting he’s never tested positive at any of the competitions he’s entered.

Bjornsson hails from Iceland, a country with a thriving strongman scene that has produced some of the most massive men to ever walk the planet—some of whom have passed away prematurely thanks in no small part to steroid use.

I can only hope he manages to avoid suffering the same fate.