Can You Get A Hangover From Marijuana? Here’s What You Need To Know 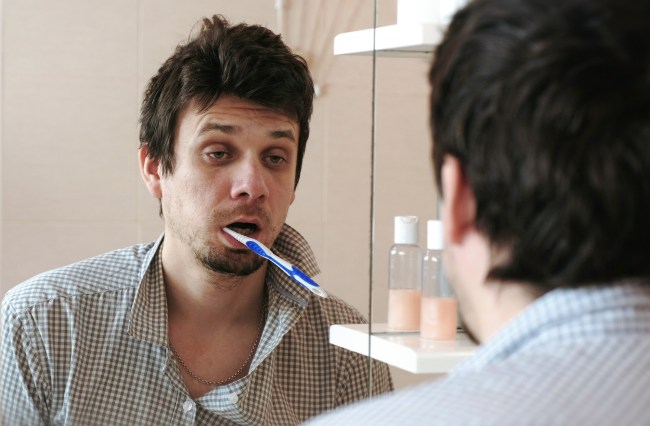 The hangover that comes from a night of pure, unadulterated self-loathing on the wings of a two-fisted booze bender is unmistakable. Everyone who has gone down this road a time or two fully understands that if they pour it on too hard down at their neighborhood swill and grill, the next morning is probably going to be chock full of vile demons from the yaks, the squirts and a throbbing skull.

But marijuana is a different story, right? We’ve all heard the spiel. It’s the one where some diehard stoner in a dirty Bob Marley shirt starts rambling on passionately about how weed should be legalized because, well, “it’s safer than alcohol, no one’s out there jerking off truckers to satisfy their addiction to it, and it doesn’t give you a hangover in the morning.” Yessirree, the toking folk have spent years trying to convince the average citizen that weed is the perfect drug for an America hellbent on getting blasted out of its gourd and still showing up to work on time.Only the decades-long tirade about weed being 100 percent hangover-free is not exactly accurate.

Although there isn’t a lot of research on the subject, people are undoubtedly waking up some mornings a smidge off their game as a result of getting too stoned the night before. These are just plain facts, people. Some of the earliest research, which was published in 1985, long before any of us were eating high-powered weed edibles and sucking on death vapes, shows that when folks consumed pot containing just under 3 percent THC, they just didn’t function the same in the morning.

“The findings suggest that marijuana smoking can produce residual (hangover) effects the day after smoking,” researchers wrote in the journal Drug and Alcohol Dependence. Yet, “the precise nature and extent of these effects, as well as their practical implications, remain to be determined.”

Back in the day, the so-called marijuana hangover was simply known as burn out. It was the feeling of waking up with a fog behind the eyes that just made everyone in the crew a little bit clumsier than usual. It wasn’t a big deal, though, and it sure as shit was a lot easier to contend with than a savage beatdown from a bottle. Because that’s the thing about a weed hangover. It doesn’t come with the pukes, we doubt it has ever put anyone on the crapper with a mean case of the back-door trots, and it doesn’t cripple the central nervous system in ways that makes us a walking calamity when we step outside. No, these stoner aftershocks are far less severe than all of that. But that’s not to say that they still don’t jam us up a little when we’ve got important shit to do.

If you’ve ever found yourself super stoned one night, only to end up crawling out of bed hours later thirsty as shit, tired like you’ve been working four jobs and felt just a little dumber than ever before, you, my friend, were probably suffering from a weed hangover. Fortunately, this temporary affliction doesn’t necessarily have its victims curled up on the shithouse floor, begging for the porcelain gods to show them mercy. If it does, chances are those THC-infused treats were being chased with something 100-proof. That’s the only explanation for such a clown shoe spectacle. It’s not unheard of, however, for these bouts with the bud to come with a dull headache. But you can take solace in the fact that the pulsing pain reverberating in your skull is not going to pound your brain into submission like a one night love affair with anything resembling brown liquor. It’s nothing that a little ibuprofen, a bottle of water and more sleep won’t cure.

But if catching a few extra Z’s isn’t an option, because, well, you know, some of us have to work for a living, there are a few things a person can do to slowly pull out of the funk. Eating a decent breakfast and knocking back copious amounts of caffeine is always a good start when trying to combat the ghost of ganja past. It also wouldn’t hurt to go ahead and hit the gym like usual, since exercise is a sure-fire way to get that green blood coursing through your system fast enough to turn it red again. Don’t be surprised, however, if all of these tricks fail to immediately rejuvenate you back to your normal, sharp self. They probably won’t pull you entirely out of your slump. What can we say? THC is a motherfucker sometimes. But they might keep the boss from riding your ass all day because he can’t quite figure out why you’re acting like such a slouch.