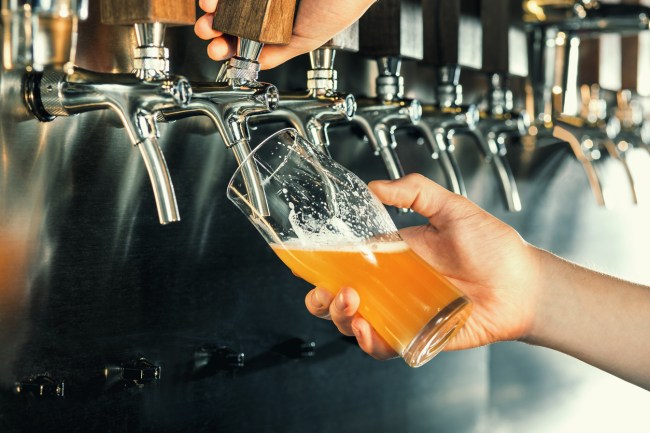 Perhaps the last thing on a man’s mind while sitting around his local watering hole, getting piss pants drunk on dollar draft night is, “I wonder if this beer has any health benefits?” The more likely scenario in any barstool bound state of inebriation is a twinge of nostalgia — thinking about the one that got away — and maybe some contemplation about just where in the hell life went wrong. See, beer was made for moments like those.

So, if any of you, our loyal, degenerate, but greatly appreciated readers are thinking right now, “Man, I’ve actually thought about the potential health benefits of the beer I’m drinking,” chances are you fall into the category of those soft-livered bastards that this article will undoubtedly make fun of and maybe even offend by the time its all said and done.

Beer, all beer – craft, domestic, that stuff they make in prison toilets — is for the cocksure, the all-day party hound, the redneck inside all of us that cries out in the dead of night, “Let’s get hammered, boys and go fuck some shit up. Yeeeee-haaaaww!”

Yet, contrary to this opinion, there are some folks who believe there is a social element to America’s sauce of choice, and they wouldn’t be completely wrong. After all, it’s no fun banging that hot chick from the bar (or an ugly one for that matter) while completely sober. And too much whiskey or vodka, well, that will almost ensure that wily, little wiener of yours goes to sleep long before you even get her home.

So, let’s get this on the table right now. If you’re one of those lightweights into the concept of knocking back suds that could possibly benefit your delicate constitution – help you avoid a massive beer gut or maintain an otherwise healthy lifestyle — we suggest you skip this piece and move on to a subject better suited to your interests. Here’s a recent piece from Cosmopolitan about Corona Light gummy bears. Knock yourself out, Nancy!

All jokes aside, there is actually a movement underway in parts of the country in which brewers are devising beers that are “better” for a person’s health. It is a trend that has been picking up momentum over the past couple of years, according to a report from CBS News.

“People are now trying to understand how to integrate beer into a healthy lifestyle,” Andy Joynt, the head brewmaster at Iowa-based Big Grove Brewery, told the new source.

Those beer snobs out there searching for organic brews are, presumably, also the same boring cuts of civil society that most likely screw exclusively in the missionary position and spend countless hours in the gym each day sculpting their abs rather than doing something meaningful with their lives. Sure, the ancient Greeks may have found chiseled abs to be a symbol of strength and power, but they did not worry about it enough to produce some half-sissy, low calorie, low carb blend to appease their femininity.

According to the report, these wholesome libations for the fitness conscious booze enthusiast are considered superior to the Coors, the Buds and the Millers because they are manufactured using locally sourced crops, and the finished product is usually no more than a month old by the time it touches the drinker’s lips, infects his central nervous system and sparks him to sing a lively version of Kumbaya on karaoke night.

“Beer in its natural state is a living thing. It retains some of the yeast which is a healthy component of beer and I think it’s a healthier form of beer when it’s brewed local and stays fresh,” Joynt said.

But don’t think for a second that sucking down beer manufactured through some fancy-smacy process that the hipsters will go buck wild over will keep you from pickling your liver any less than those bottles of domestic piss water they sell for $15 a case. It will not. In fact, a recent study suggests that even the biggest candyassed beer drinker – the guy who has the occasional brew at dinner or on special occasions — is still at risk for a variety of health conditions and an untimely demise.

As for the rest of us, the diehards who like to knock back five or six lagers before we really get serious about pouring that hoppy Jesus juice down our fiending gullets, we are all doomed to die a miserable death, according to a recent study published in The Lancet.

But not before our bloated, yellowing bodies endure the painful decline into cirrhosis of the liver.

If we’re lucky, the years of beer-soaked rampages will only lead to terminal cancer. But the upside is then we can make some of those pathetic collection cans — you know the ones often seen in the check out lines of convenience stores — plaster them with our ugly mugs along with a message that reads, “Hey man, I’ve got beer cancer. Please help me get stepdad drunk in my final days.” We could then distribute them to all of our local liquor stores and use the donations to fund one hell of a sending off party.

What we’re trying to say is life is too short to worry about drinking beer made from organic sources. Fuck that. Drink what you like, consume as much of it as you want, and as long as you don’t get so hammered that you start beating your kids or commit an unintentional act of vehicular terrorism, you, my dear boozehounds, are living your best life.