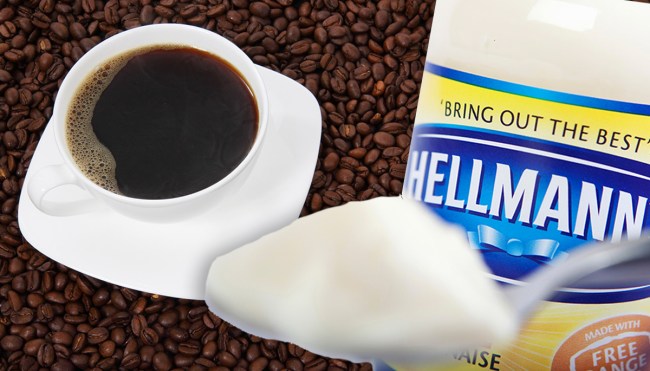 It’s hard to think of a single item in the culinary world that’s more divisive than mayonnaise; like Ayn Rand, chihuahuas, and the music of Dave Matthews Band, mayo is one of those things people either love or despise with an undying passion with virtually no middle ground.

As a diehard Mayo Hater, I can barely stand the sight of Guy Fieri’s beloved “food lube. Unfortunately, thanks to the cursed nature of the internet, I’ve found myself routinely revolted by people who can happily down globs of it by the spoonful and filmed themselves doing exactly that to share with the world.

I’ve also been downright offended by the unconventional ways people have dreamed up to consume mayo, including Dale Earnhardt Jr.s’ favorite sandwich and the ice cream shop that decided to whip up a frozen treat inspired by the Devil’s condiment.

Hellmann’s didn’t really need to do anything to cement its position near the top of my list of mortal enemies, but on Thursday, it managed to get bumped up a couple of spots just below “People Who Play Music On Public Transportation” thanks to a tweet with a suggestion that has understandably gotten the internet very riled up: putting mayo in your coffee.

Mayo in your coffee.

Nope, that wasn’t a typo.

Mayo in your coffee.

It’s called having a sophisticated pallet.

The benefits of putting mayo in your coffee include:

-mayo in your coffee
-coffee in your mayo

I don’t even want to attempt to rationalize the thought process that led to someone deciding it was a good idea to introduce that notion to the world; I guess it could be viewed as the spiritual relative of the “Bulletproof Coffee” that Had A Moment last decade, but it’s more likely it was engineered in a lab by scientists tasked with figuring out how to disgust the most people with the fewest words.

Based on the reactions the tweet managed to generate, they did their job very well.

To those asking why… They want us to put mayonnaise in our coffee. I won’t tolerate it. https://t.co/JbZUcHLjBc

Everyday we stray further and further from God's light https://t.co/aVzp2LJ9A0

I need a rocket launcher for reasons.

Ps: I left you the good cookies this time too. They’re Chips Ahoy, but the scotch is 32 years old.

After doing a bit of digging, it appears we can trace this all back to University of Kentucky quarterback Will Levis, who somehow managed to top the insane manner in which he eats bananas when he revealed he’s a big Mayo in Coffee Guy on TikTok last week.

Earlier this week, Duke’s Mayo Bowl gave that move a ringing endorsement, and it looks like Hellmann’s decided to hop on the mayo coffee bandwagon.

Every day we stray further from God’s light