Is Henry Cavill Going To Appear As Superman In The Rock’s ‘Black Adam’? An Investigation 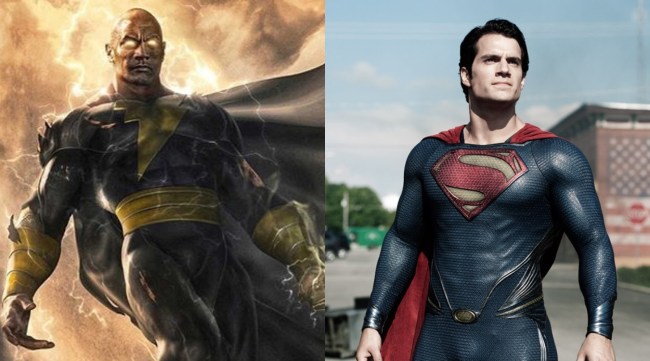 Folks, we are officially in peak internet slow season.

The NBA is off until Thursday following the All-Star break, baseball has yet to begin, football’s new league year — and therefore free agency — has yet to kick-off, and there are no real big movies released during this time period (sorry, Birds of Prey, I actually thought you were really good). Sure, Better Call Saul returns next week and The Outsider is tearing shit up on HBO, but other than that, it’s not really television’s primetime, either.

But, luckily, if New York City is the city that never sleeps, then comic book movies are the industry that never sleeps, as there’s essentially always something to report on or speculate about. And today, that speculation comes courtesy of Dwayne Johnson and his upcoming DCEU project Black Adam.

Taking to his ever-powerful Instagram account, The Rock posted yet another tease for Black Adam, which is set to begin shooting this Summer ahead of its current December 2021 release date.

Pretty much status quo stuff from DJ: dude is looking yolked as hell standing in a metal (in the music sense, not the elemental sense) AF gym wearing some sweet-lookin’ Under Armour kicks. Par for the course.

But then, because my brain is essentially an endless wasteland of toss-away knowledge and fun facts,  I realized that literally every time The Rock promotes the project on his Instagram, he makes sure to include the teasing phrase “the hierarchy of power in the DC Universe is about to change.”

Which leads me to one conclusion: he’s teasing the involvement of Superman. But, because it’s the DCEU, here is where things begin to become a little complicated.

If you think back to Batman v. Superman: Dawn of Justice and Justice League — which, trust me, I try to do as little as possible — you’ll remember that Superman and his game-changing power is essentially the crux of the franchise’s overarching narrative.

In Batman v. Superman, it took the form of “look, if we don’t kill this guy, we’re fucked” and in Justice League it shifted to “well, we’re pretty much fucked, BUT, if we can resurrect Superman…”

Point being, Superman’s status as the DCEU’s most powerful being is certainly a theme that’s been hammered home throughout the franchise’s run, which is exactly what makes Johnson’s repetition of that very specific phrase — “the hierarchy of power in the DC Universe is about to change” — so intriguing: the only way you change the hierarchy of power is by challenging those at the top, and in this case, that’s Superman and Superman alone.

First and foremost, no one even knows if Cavill is still Superman. In September 2018, it was reported that he and Warner Bros. had decided to part ways. Then, last November, it was reported that Michael B. Jordan was approached about the role for a J.J. Abrams-helmed reboot. Needless to say, neither of these reports were promising for fans of Cavill’s Clark Kent.

But, late last year, Cavill’s tune began to change, as he intimated to Men’s Health that the role was still his.

“The cape is in the closet,” Cavill says. “It’s still mine… I’ve not given up the role. There’s a lot I have to give for Superman yet. A lot of storytelling to do. A lot of real, true depths to the honesty of the character I want to get into. I want to reflect the comic books. That’s important to me. There’s a lot of justice to be done for Superman. The status is: You’ll see.”

That’s certainly a bold stance from Cavill and one that he would likely only be taking if he and Warner Bros. had, at the very least, had some sort of discussions about his future.

This leads us to the answer of our original question: will Cavill’s Superman appear in Black Adam? And to me, the answer is yes.

Not only does Black Adam present the perfect opportunity to softly reboot the Man of Steel, but if Warner Bros. is serious about having Johnson’s anti-hero being a hierarchy-shifting force in the DCEU, then there is only one character he must overcome if that’s to be true, and that’s Superman.

Plus, there’s this extremely-telling tidbit from Black Adam producer Hiram Garcia, whose wink-winks can essentially be heard by simply reading this quote:

“I think the DC Universe is a wonderful universe and we’re open to everything,” Garcia said at a recent press event. “We have big aspirations for it. We’re friends with Henry. [Dwayne] and Henry are friends, it’s a huge comic book brand as well. And I always just loved the idea. Who knows? But man, Black Adam for Superman is really cool. That’d be really powerful.” [via Collider]

The Rock is many things, but perhaps most of all, he is a brilliant marketer, so trust me when I say that his constant “power/hierarchy” jargon is being perpetuated for a very specific reason, and my guess is that reason will be the appearance of the Last Son of Krypton in Black Adam.

P.s. – for what it’s worth, I actually really enjoy Cavill as Superman and would love to see him return to the role.