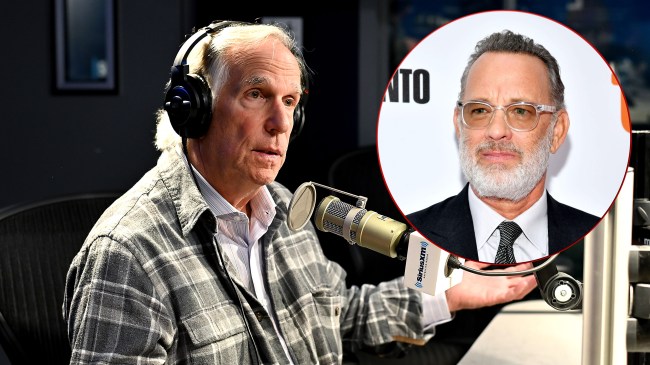 Can you imagine what a beef war between Henry Winkler and Tom Hanks must be like? What do they do? Refuse to say “please” and “thank you” to each other to show their displeasure with one another?

I ask this because the lovable Henry Winkler says he and the uber-nice Tom Hanks have been in a secret feud for the past 30 years, ever since they worked together on the 1989 movie Turner & Hooch.

During his appearance on Watch What Happens Live this week, Winkler, best known for his work on Happy Days, Arrested Development, and currently, Barry, was asked by a caller if the rumors about a long-rumored feud between him and Hanks was true.

“What was the real reason why you and Tom Hanks didn’t get along on the set of Turner & Hooch, and did you ever wind up seeing that movie?” asked the caller.

“Is that a thing?” host Andy Cohen asked the 73-year-old actor and director.

Winkler’s first reaction was to feign deafness, putting his hand to his ear and asking, “What did you say?”

He quickly came clean, however, responding, “I was directing that movie for 13 days, and then I was called into [former chairman of Walt Disney Studios] Jeff Katzenberg’s office and he said, ‘Do you have everything with you? Go home.'”

After a moments pause, Winkler added, “I got along great, great with that dog. Loved that dog…that was the dog movie, loved that dog.”

So this pretty much confirms what Winkler hinted at back in 1993 when he told People magazine, “Let’s just say I got along better with Hooch than I did with Turner.”

If someone in Hollywood doesn’t somehow orchestrate a reunion show between Winkler and the 63-year-old Hanks before they’re both gone, then we have just failed as a society…again.