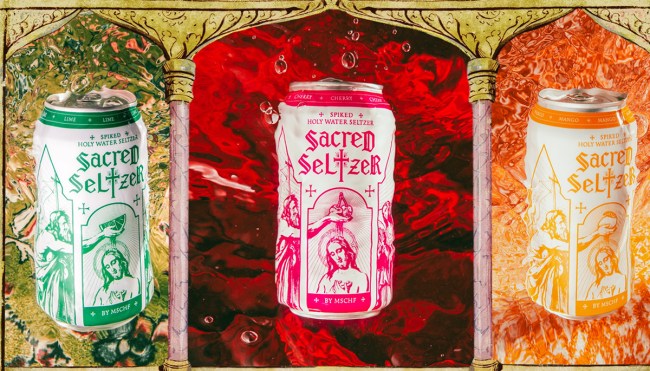 It’s been around three years since the world kicked off the Summer of White Claw and embraced the lawless spirit that accompanied the craze that was seemingly spawned overnight; by this point, it would probably be easier to list the beverage companies that haven’t tried to get a piece of the lucrative hard seltzer pie.

Last year, we got our first hint the bubble that formed when the market was inundated with fizzy adult beverages was on the verge of bursting, and while there’s no doubt spiked seltzer is here to stay, it’s hard to imagine the same can be said about many of the brands that scrambled to take advantage of the boom without bothering to do much to differentiate themselves from the rest of the crowded pack.

I recently touched on that existential issue after trying Michelob Ultra’s newest offering. We’ve reached a point where there isn’t really anything left to do that hasn’t already been done when it comes to dreaming up a truly innovative concept unlike anything people have seen (or tasted) before—or so I thought.

On Monday, MSCHF—the collective that sparked a national panic after teaming up with Lil Nas X to produce 666 pairs of the “Satan Shoes” that each contained a drop of human blood—unveiled a new drop that will undoubtedly go over super well with the people who objected to the creation of those sneakers: hard seltzer made with holy water.

The MSCHF crew pulled a similar stunt in 2019 with the “Jesus Shoes” that featured soles filled with holy water sourced from the River Jordan and retailed for $1,425 a pair. As a result, I’d argue six-packs of the drink dubbed “Sacred Seltzer” (each of which boasts two cans of the lime, cherry, and mango variety) are an absolute bargain at $24 a pop.

Are you paying a premium compared to what you’d typically shell out for the same number of unsanctified hard seltzers at the store? Sure, but I’ve yet to come across a single supermarket or deli selling sixers of Truly (or any product, for that matter) that were “blessed according to official Catholic procedure.”

I can’t even fathom the amount of willpower required to buy a product officially marketed as “Spiked Holy Water Seltzer” without cracking it open to see how it tastes (don’t worry; it’s not a sin), and the folks at MSCHF were kind enough to send some my way so I could do exactly that to help you make the most informed purchase possible.

If you’re curious about the specs, each 12 oz. can of Sacred Seltzer boasts 100 calories and an ABV of 5.1% (as far as provenance is concerned, it was made at Eliqs Brew Co., an operation that specializes in “custom-designed beverages for every moment”).

However, if you’ve made it this far, I’m going to assume you’re more curious about the essence of the #blessed beverage than anything else.

The good news? It’s certainly not the worst hard seltzer I’ve had the displeasure of trying (and I have tasted more than I can count for the greater good over the past few years). With that said, it’s not exactly vying for a spot on the podium next to the best ones.

The biggest knock against Sacred Seltzer is one that’s plagued plenty of other brands: an instantly identifiable malty taste (I’ve taken to describing it as “graham cracker”) that tends to overwhelm everything else. The good news is all of the flavors manage to avoid falling victim to the issues of artificialness or cloying sweetness that can make drinking other hard seltzers a truly unpleasant experience, but I think the phrase “chaotic neutral” is the perfect way to sum this one up when it comes to determining where it ranks among the rest.

However, if “certainly palatable” is your threshold when it comes to pulling the trigger on this, then you can snag a six-pack here.