Here Is How Conspiracy Theories Spread Like Wildfire On The Internet 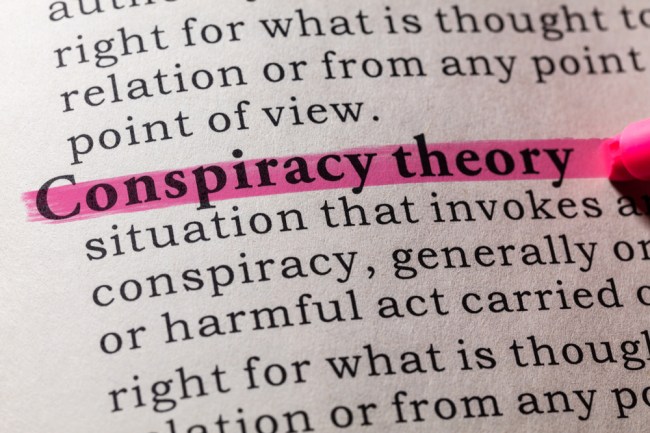 There was once a time when conspiracy theories were only spread late at night over a bag of weed and a case of beer. It was the same scenario across the country. Some old hippie in a Led Zeppelin t-shirt, getting blazed out with a group of youngsters, would start in on wild-eyed tirade about how the federal government has been bamboozling the American people since before the signing of the Declaration of Independence.

Area 51 and aliens might be the first topic of discussion, followed by the moon landing hoax and the Kennedy assassination. But as the youth in the room brushed off these potential conspiracies, perhaps even poking fun at the old stoner for riding the wave of paranoia to the bitter end, the subject matter would go deeper and darker into the roots of the so-called American dream.

At some point, the old guy would pull out a dollar bill and show the kids the Eye in the Pyramid, the Maltese cross and all of the other bizarre images in the note, suggesting that the real power controlling the nation is a Satanic order. “Ever hear of the Illuminati?” he might ask, gradually getting the kids to second-guess their apprehensiveness toward these tales.

But since the creation of the Internet, which spawned the global obsession for fish-face selfies, digital cries for attention and droves of opinionated distractions powered by the force known as social media, conspiracy theories can now spread like a vicious plague in a matter of days.

Old hippies are no longer necessary to distribute government plots and other wicked schemes to put a tight leash on We the People. All that is needed is the “share” button and a society of pop culture sucking fiends to dole out fear and overwhelming doubt to the masses. Some might even say that the Internet is the most ingenious addition to the world of conspiracy theories. In a society of headline readers, where billions of people are making determinations into what is factual and real based on four or five words, it seems to have become less important to distinguish between fact and fiction.

It is for this reason that conspiracy theories are becoming more prevalent than ever before.

Unlike the time when old hippies really had to sell the drama of citizens being scammed and screwed by Uncle Sam and his misfit cronies, researchers now say it is easier to convince the public of hair brained ideas because the majority is quick to buy into tales that tickle their ideologies.

Previous studies have suggested that conspiracy theorists are “monological” believers, meaning that their belief, in say, the moon-landing hoax enables them to easily swallow other potential conspiracies. This type of believer is likely destined to go to his grave convinced that the Department of Defense has alien consultants; that the CIA killed Kennedy; and that the Bush Administration organized a “terror campaign” to blow up the World Trade Center. Now matter what conspiracy theory floats to the surface, someone categorized as “monological” is quick to jump onboard without much persuasion.

But come to find out, the term “conspiracy theorist” is far-reaching concept. The nature in which a supposed plot is swallowed without much juice to wash it down really just depends on the individual’s belief system. Groups are always on the hunt for ammunition to support their respective agendas. Christian zealots are on the prowl for messages that fit into theirs, just like anti-drug and gun advocates and national industry — any cluster of folks with a specific set of interests is quick to believe and spread information, regardless of the facts, if it is packaged in a way that supports their beliefs.

“It is commonly believed that conspiracy believers tend to be the kind of people that connect every conspiracy to everything else – like the typical tinfoil hat wearing stereotype,” lead researcher Colin Klein from the Australian National University told Science Alert. “You have to realize it’s not just people who are crazy and distrust everything. We found that there are those people, but they are the tip of a much larger iceberg.”

Researchers say conspiracy theories can now go viral when a wide range of people and organizations get involved. A prime example would be the latest hypothesis surrounding the Parkland School shooting. The idea that the survivors were actually trained actors attracted the interest of parents, students, anti-gun groups, pro-gun groups and the mainstream media.

“The most successful conspiracies were the ones where everyone can get something out of it,” Klein said.  “Each gets what they need, and each contributes to the larger whole.”

Although nowhere near as interesting as the possibility that the federal government faked the moon landing, the potential conspiracies surrounding the Florida tragedy are still showing up in the news. The latest suggests that David Hogg, the student activist (and survivor) pushing for gun law reform, was not even at the school at the time of the shooting. Similarly, some people believe the Sandy Hook massacre was an elaborate hoax.

Researchers say conspiracy theories are really just about cherry picking what is needed from the story to support overreaching beliefs.

“Ultimately, we doubt that there needs to be any particular set of psychological motivations which characterize conspiracy theorists,” the study authors wrote. “Some are irrational. Some are irate. Some are epistemically unlucky. Some are racist. Some are skeptical. We should not say that conspiracy theorists have overarching belief systems that encompass and unify a wide variety of different narratives. Instead, it may be the other way around: it is conspiracy narratives that are all-encompassing, pulling in a diverse group of people who may have little in common with one another, each of whom can find what they need in a fragment of the larger tale.”

At least that’s what they want you to think.