This Is What It Takes To Be A Professional Cornhole Player – Yes, A PROFESSIONAL CORNHOLE PLAYER 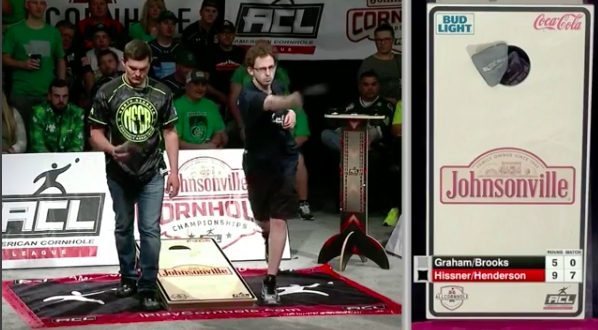 What did you want to be when you grow up? I wanted to be a construction worker. Then I found out that I’m a functional moron with a hammer and terrible at following directions when it comes to building things. I can landscape perfectly fine, but building things without getting them to collapse? Not my forte. Not exactly the type of person you’d want to trust with structural integrity of, say, building a skyscraper or house or, heck, even a deck in the backyard.

That question, of course, evolves the more you grow comfortable in your own skin.

I don’t know what you call that as a job title, but I’m lucky enough to get paid to do exactly that and keep the wheels on this cart called BroBible so… living the dream, of sort.

You know who else is living the dream? Cody Henderson, an emerging talent on the professional cornhole circuit. Cody is a disciplined cornhole player and one of the rising stars in the American Cornhole League.

In a move that feels very self-aware and very ESPN-the-Ocho, Yyou may have noticed ESPN airing cornhole tournaments lately – Cody is one of the dudes who plays in those. His performances are electric:

Professional…. CORNHOLE HIGHLIGHT REEL?! 🤙 Cornhole is on ESPN now and the @iplaycornhole is just starting to take off with big national competitions. One of those dudes is @CHcornhole, a professional cornhole player (…who still has a day job). pic.twitter.com/JiVPNfKSvE

There’s a lot of cultural mystique at the idea of a professional cornhole player. You may be thinking the following right now: “You can play cornhole – the thing I play in my backyard with my cousins during summer cookouts with a beer in my hand – for money?!”

This week I had Cody on my podcast, SO STUPENDOUS, to talk about how the great American competitive cornhole wave is starting to fly high.

Cody still works full-time as an operations manager at a warehouse in Ohio, but it’s clear that his passion is competing at the highest level possible in cornhole. It’s not unrealistic to think that cornhole will have its own Michael Jordan in a few years as it continutes to grow and get eyeballs.

If you’re curious about what it takes to become a professional cornhole player yourself, go listen to SO STUPENDOUS, now available in the iTunes Podcast app. Episode 3 of SO STUPENDOUS also includes an interview with legendary actor Martin Kove a.k.a. evil sensei John Kreese from Cobra Kai/The Karate Kid. Subscribe to it in the Apple Podcast app and throw it a review – If you dig it.

Or stream it below: