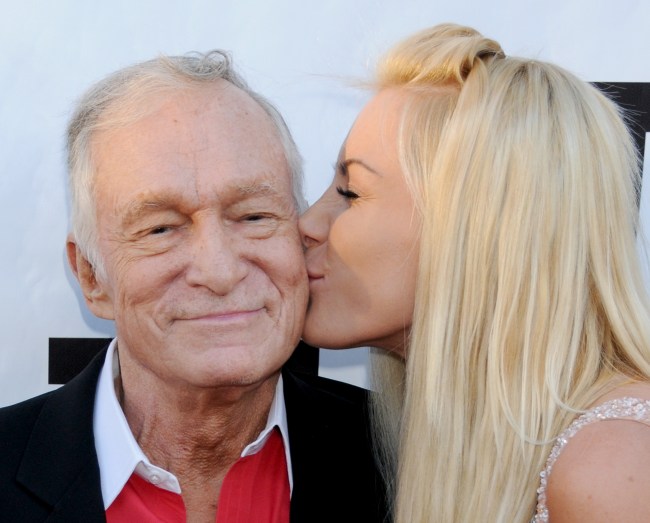 It’s not difficult to draw conclusions from that headline, which describes the relationship between Crystal Harris and Hugh Hefner. Harris–December 2009’s Playmate of the Month–married Hef back on New Years’ Eve 2012, months before initially getting cold feet and calling off a wedding with 300 guests set to attend.

Close friends and family were initially skeptical of Harris’ motives, especially after she outed Hef for being a less than ideal lover–saying she only sex with him once and it lasted ‘like two seconds’, adding: ‘Then I was just over it. I was like, ‘Ahhh.’ I was over it.’

But hey, no partner is perfect, and it has been revealed that Harris’ relentless support of Hef in his final years won over the hearts of the icon’s loved ones.

Playboy sources told TMZ  that Crystal surprised a lot of people by standing by Hef’s side as his health declined, enough so that people close to Hef called her a “pillar of strength.”

Crystal reportedly attending Hef’s doctor’s appointments and organized game and movie nights to infuse joy into her husband’s life. And, when Hugh was on bed rest and not accepting any visitors, Crystal was constantly by his side, dispelling all doubts Hef’s family had about her not being there to support him when times got tough.

Although Hef left Crystal out of his will, he left his 5,900 square foot Hollywood Hills mansion in her name, a home he reportedly bought her in 2013 for $7 million. The mansion features four bedrooms, five bathrooms, an infinity pool, and floor-to-ceiling windows. Oh ya, and Hef also left her $5 million to play around with.

Crystal made out mighty fine, but something tells me that Hefner was pleased with his investment.