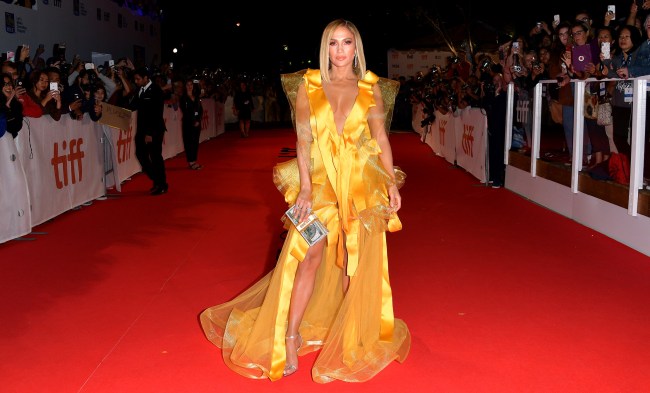 Jennifer Lopez has been riding high ever since the release of her crime drama Hustlers, snagging Golden Globe and Screen Actors Guild Award nominations for her performance in the film.

Unfortunately for her, a damper has been put on her celebration because Hustlers inspiration Samantha Barbash has filed a $40 million lawsuit against Lopez’s production company Nuyorican Productions after previously claiming JLo stole her story to make the movie.

Hustlers had a $45 million opening weekend and ended up making around $157 million worldwide and Barbash hasn’t seen a dime of that money even though the story is about her life.

“It’s about my life. They pretty much basically stole my story,” Barbash told TMZ last September. “I wouldn’t sign my rights away … I wasn’t giving up my TV and film rights for peanuts. J.Lo doesn’t work for free. Why would I? I’m a businesswoman.”

The fact that one of the other women the movie is based upon, Roselyn Keo, Destiny in the film, was at the movie’s premiere only serves to reinforce Barbash’s claim that a majority of the plot was based on her life and infamous court case.

Barbash’s lawyer Bruno Gioffre told Page Six at the time that they were planning on “seeing the movie before deciding on what steps to take.”

Apparently, they’ve decided on those steps.

Samantha Barbash claims in her suit, producers approached her to get her consent for the movie and she turned a thumbs down on them. Despite the rejection, the flick was produced with J Lo playing a character obviously based on her. We broke a story back in Sept. that Barbash was pissed that she received a lowball offer from producers.

Barbash says the character in the movie is portrayed as “using and manufacturing illegal substances in her home where she lived with her child.” She says it’s untrue and offensive.

She’s suing for $40 million — $20 mil in compensatory damages and $20 mil in punitives. She also wants an order requiring producers to turn over all copies of the movie.

“The film depicts Ms. Barbash, played by Jennifer Lopez (“JLO”) as the ringleader of a group of adult dancers who drugged their patrons and stole exuberant amounts of money from them while in their incapacitated state,” the lawsuit states. “Defendants did not take caution to protect the rights of Ms. Barbash by creating a fictionalized character, or by creating a composite of characters to render JLO’s character a new fictitious one; rather they engaged in a systematic effort to make it well-known that JLO was playing Ms. Barbash.”

In addition to the money, Barbash is also asking in the lawsuit that the film’s producers cease the release of the movie and turn over all copies and promotional material to her. Good luck with that.