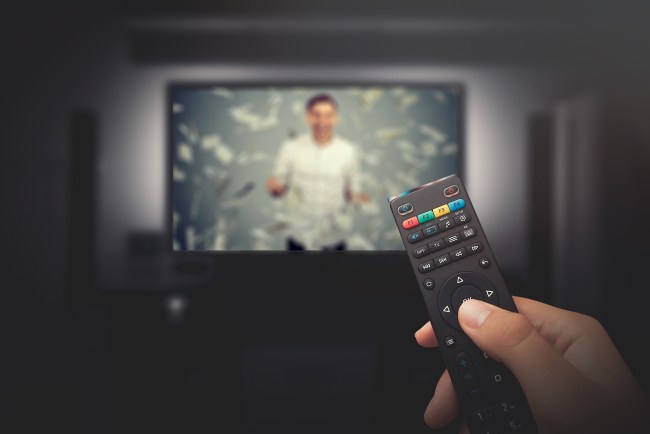 Earlier this month, Netflix released a game show (which is apparently a thing it’s doing now) in the form of Floor Is Lava. If you haven’t seen it, it’s exactly what you think it is: that game that kids play where they leap between pieces of furniture while trying to avoid touching the ground (sort of like those Russian guys who film themselves parkouring across the rooftops without the added risk of ending up on LiveLeak after falling to your death).

There are some key differences, however, as the competitors on the Netflix version don’t endlessly scream “Floor is lava!” the entire time they’re traversing a course where coffee tables and leather sectionals have been replaced by obstacles resembling Easter Island statues and the Ark of The Covenant.

This is just the latest entry in a trend that’s been going on for quite some time where almost anything can be turned into a game show. In just the past year, I’ve seen a Lego building competition, competitive tag, and a mini-golf show that borrows some elements from Wipeout.

In my opinion, the best game shows are also some of the simplest in regard to both concept and production. The Price Is Right is essentially just a game where you have to guess how much a sack of groceries costs. Wheel Of Fortune is basically crossword puzzles that take infinitely less brainpower to solve, and Deal Or No Deal only requires you to know about the existence of numbers up to 26, occasionally say one of the two phrases that make up the name of the show itself, and fist bump a germaphobic comedian.

Since game shows seem to be based on anything you can imagine these days, I came up with a few ideas of my own that have just as much business (if not more) gracing the airwaves than some of the others I mentioned. Feel free to hit me up, Netflix. I’ll be waiting.

One of my biggest pet peeves is when a person offers up unsolicited medical advice even though they haven’t actually taken a class about health since they learned how to put a condom on a banana during their sophomore year of high school. I can’t figure out why this isn’t considered bad form, especially in the case of something as serious as someone’s health.

If your air conditioning stops working and you tell someone about it, they don’t start diagnosing the problem. If they offer anything, it’s typically along the lines of, “Hey stupid, go call an HVAC guy.” However, if you sneeze, you wind up with a chorus of Dr. Houses telling you what you need to do to fix it.

I think it’s about time we put these people on TV to let them flex their medical “knowledge.”

The show would be called I’m No Doctor, But… (the universal warning that lets you know you’re dealing with one of those people) and would consist of three contestants who are presented with real patients with actual maladies. The type and severity of the illnesses would differ from round to round and would get progressively more difficult over the course of an episode. For the first round, you’d have a guy who walks on stage with what is clearly a case of chickenpox, but once we reach the final one, we’re featuring a guy with a neurological disorder that’s so rare it’s named after him.

Here’s how it works: the contestants offer their diagnoses before we bring in a doctor (a real one as opposed to someone with their own show with “Dr.” in the name) to give an actual one. If the amateur physicians are correct, they get a point, and—get this—whoever has the most points at the end wins.

I think this would be a smash hit because it touches on people’s morbid curiosity and fascination with the medical world. I just know that there would be douchebags who would sit at home and say, “I’d crush it if I were on that show.” If it gets super successful, I’d also be open to a spin-off where people who aren’t lawyers dish out legal advice in order to capitalize on a very similar social scourge.

I love it when a TV show based on a fad is released long after everyone has stopped caring about the fad itself. I also love how many shows have been built around the idea that the simplest way to make a popular television program is by starting with the statement, “Let’s have celebrities do [literally anything].” I attribute this phenomenon to The Tonight Show and would like for it to be henceforth known as “Fallon’s Razor.”

So how about we marry the two? Those stupid fidget spinner things were big a few years ago, which means they’ll work well for this application. Next, we get some celebrities, give them those fidget spinners, and wait for hilarity to ensue.

Maybe they get into some kind of petty argument over who gets the blue one. Maybe one of them pretends it’s a hat or something. Maybe another uses the opportunity to shoehorn an empty political message into the program like, “This fidget spinner reminds me that we’re all on this planet together and spinning at the same speed as one another.”

I don’t know; that’s for the celebrities to figure out (which is the beauty of the whole idea in the first place). My job is just to set everything in motion and I’ve done exactly that.

It’s all in the name, folks.

This game show would focus on contestants racing against the clock and attempting to complete moderately annoying tasks. I’m thinking things like untangling earbuds that someone left in their pocket, trying to find the right kind of screwdriver in a drawer full of screwdrivers, or folding a map.

The production value wouldn’t be very high but I like to think that that’s part of the appeal. I mean, we’ve all been there, right? RIght?!?!

Alright, maybe this isn’t the most exciting idea and I acknowledge some of the challenges could be a tad outdated. Sure, watching someone try to fold a map after not encountering a map for two decades could be entertaining, but only for so long.

But hey, if there can be a show about people performing tasks that are as challenging as they are mundane while Guy Fieri cheers them on, I don’t see why we can’t make this.

We’ve got a simple premise here: take adults and make them participate in a sport they’ve never played before.

I’m thinking this could be a limited series that runs for, like, six weeks.  It’d be a perfect midseason replacement for when the new network sitcom inevitably tanks. It would kick off with a big selection show where we get to meet the contestants and each one pulls a lever that randomly assigns them their sports. All of your favorites are on there but there would also be some monkey wrenches thrown in just for good measure. Jai alai, anyone?

Then, we follow them as they try to learn this new sport before they ultimately compete in a real event. The winner is decided by an audience vote based on who has improved the most over the six weeks (although I’m open to an alternative way of crowning a champion because I don’t like leaving things up to the public. That’s how you end up with a boat named “Boaty McBoatface”).

A Camera Inside The Family Feud Green Room

This one isn’t a game show itself but more game show adjacent. However, I think you’ll be on board once I explain it.

The people that appear on Family Feud are always perpetually happy and have smiles plastered across their faces that look like someone stapled their cheeks back. Even on the worst answers, everyone claps until their hands start to bleed and offer up a chorus of “Good answer, good answer!”

Considering there is money on the line and how I’ve encountered very few families that don’t have at least some degree of dysfunction, I’m led to believe the ear-to-ear smiles and overall jocularity are nothing but a facade.

This show starts as soon as the actual show ends and the losers trudge to the green room. I want to hear families going at each other over their respective performances. I feel like it would offer so many great moments and storylines in addition to some particularly entertaining recurring themes, like:

The big selling point here is the drama and cringiness. Maybe this one wouldn’t be for everyone but I know I’d tune in every week.