Illegal Cricket Fighting Is Such A Huge Deal That A Bug Won $20,000 For ONE Fight 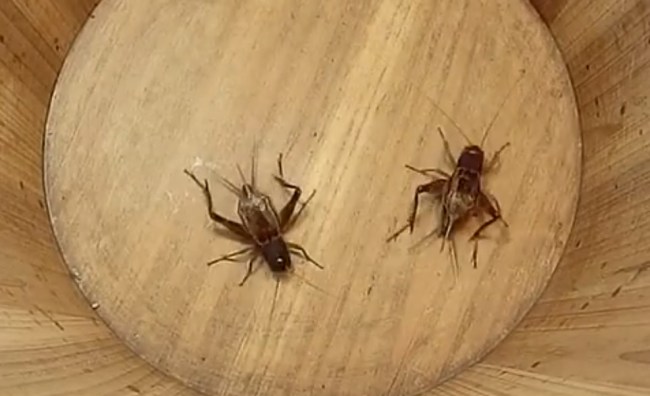 CRICKET FIGHT!!! No Cartman, I said “Cricket Fight” as in where two crickets are forced to battle one another in an arena of death. These insect on insect violence isn’t just survival of the fittest out in nature, but where humans bet on crickets to beat up other crickets. And people are spending a ton of money on the sport.

Cricket fighting is huge in China where the sport has been a beloved pastime dating back to the Tang dynasty that came into power in 618 AD. Despite the extremely long history and popularity, gambling on cricket fighting is illegal. This week, an illegal cricket fighting ring was broken up and with it an exorbitant amount of money. Looks like someone forgot the first rule of cricket fight club.

Allegedly, there were two men arrested for organizing a cricket fighting event in an underground casino. The cricket fighting festivities took place over a week where 300 cricket fighting enthusiasts gambled approximately $140,000 on their favorite brawling insect that they referred to as “little gladiators.”

ARE YOU NOT ENTERTAINED!!!

Cricket fighting is no joke. There are different weight classes and even uniformed referees in this blood sport. Each boxing bug gets their own room because they’re stars in their own right. To motivate the bugs to greatness, there is a framed photo of a cricket named Hongyaqing, which translates to “a black cricket with two red teeth.” Hongyaqing is a big deal around these parts because he won the 2004 National Cricket Fighting Championship.

One of the insect trainers had 70 crickets ready to fight to the death. Another fighting cricket owner won $20,000 in a single match when his bug pulled off an upset. A bug made more in a 5-minute match than you make in eight months. Let that sink in.

You had better pray to the bug fight gods that the cricket you have all your money on doesn’t have too much nitric oxide. Scientific studies have found that nitric oxide controls the bug’s fight or flee decision-making. If a cricket gets hit too many times then the cricket brain will release nitric oxide into its system causing the little bugger to run from the fight.

These cricket fights are cute compared to the fight-to-the-death carnage that happens at Japanese bug fights. Interspecies brawls including Scorpion vs Giant Hornet, Red Lobster Vs Killer Beetle, and Giant Asian Hornet vs Centipede.