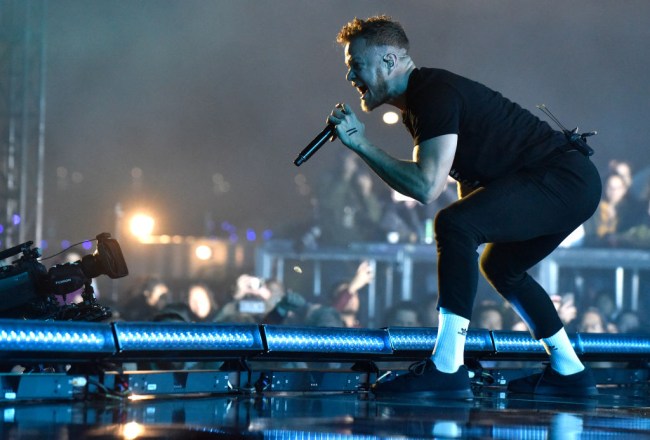 Is agreeing to perform at halftime of a sporting event the biggest money grab in the entertainment industry? It has to be right? NO ONE ENJOYS THAT SHIT. And if you disagree, close your eyes and tell me the first thing that comes to mind when I write “memorable halftime show” on three.

One-two-NIPPLE SLIP! Me too, bro. Me too.

Unfortunately for Imagine Dragons, they don’t have much margin for error. Some are dubbing them “millennial Nickeback” for their distinctive, yet tormentingly repetitious sound. They aren’t particularly my cup of Dran-O (not a big thunder guy), but their legacy isn’t for me to decide. Plus, after last night’s performance with Lil Wayne at the College Football National Championship game, it seems like the public has already made up their minds.

Whether your an Imagine Dragons fan or not, you must admit that these tweets are funnier than Lil Wayne dressing like the Hamburglar with an addiction.

Imagine dragons… the lyrical geniouses of our generation pic.twitter.com/hgHQA9f6tU

imagine dragons is music for speeding in your toyota sienna

I don’t want to overreact, but Imagine Dragons should be in prison

Can you IMAGINE this performance DRAGON on any longer?

My mood after watching that Imagine Dragons halftime show at the #NationalChampionship pic.twitter.com/YzqnTxlKM4

Imagine Dragons is like if Coldplay fell into a giant vat of Axe Body Spray.

behind the scenes look at imagine dragons song writing pic.twitter.com/4MRrxMvjV2

It’s all fun and games until I realize that Imagine Dragons could buy my family home, bulldoze it, and make it a Crossfit gym just for the fuck of it. Lions don’t lose sleep over the opinions of sheep, but holy fuck their music is BaAaAa-d.