Is A Narwhal Tusk The Answer To Terrorism?

Two Londoners, one armed with a fire extinguisher and the other with a narwhal tusk, take on a knife-wielding terrorist on London Bridge. pic.twitter.com/QtJrgei5do

A guy who was with us at Fishmongers Hall took a 5’ narwhale tusk from the wall and went out to confront the attacker. You can see him standing over the man (with what looks like a white pole) in the video. We were trying to help victims inside but that man’s a hero #LondonBridge

Is a narwhal tusk the most effective anti-terrorism tool we have? It sure made a case for itself in this weekend’s London terrorist attack.

A convicted murderer was among ex-prisoners and members of the public who grappled with and grounded the London Bridge knife attacker before police arrived.

One man was armed with a fire extinguisher and another a 5ft narwhal tusk as people at the scene surrounded the attacker, who was eventually pinned to the ground.

I fantasize about thwarting terrorist attacks.

I spoke about the “stopping an active shooter” dream on my podcast recently, and more people wrote me about that clip than any other topic we’ve covered. As it turns out, many of us have placed ourselves in this scene. It’s not that surprising; we all have hero fantasies. What kid didn’t count down the seconds on an imaginary clock as he/she heaved a fadeaway three on some netless hoop? The 10% of the time it sank, you could feel your body being hoisted atop the shoulders of grateful teammates en route to a Surfer Cooler shower and all the chicken McNuggets you could stomach. Hell, I even counted and *tried* to dribble in slow motion. Tough to dribble in slow-mo though, what with gravity’s try-hard refusal to take a day off.

As you grow, your hero fantasies develop. Mine took on a more local, humanitarian hue. The NBA game-winner loop was replaced by the life-saving citizen dream when my newfound taste for powder days saw me spending more winters on the mountain than the free throw line. The visions were humble at first: pulling a crate of labradoodle pups out of a burning barn, handing them by the scruff of the neck to the weeping village children. Or a full-extension Coco Crisp grab of an infant falling from the 7th-story window of a tenement building. Once I moved to New York, my mind’s eye saw me pushing beautiful women out of the path of careening cabs and oncoming subway trains on a daily basis. Walter Mitty held no candle to my acts of service.

One of my favorites was the sinking car fantasy. I believe Will Smith’s futuristic I, Robot planted the seed. There’s a scene where Will solemnly recounts the tale to Bridget Moynahan (Blue Bloods, Tom Brady).

In my version, I’m driving along a dark road when I see skid marks leading to the busted guardrail of a bridge. I stop my car (it’s backroads in the country) and peer over the edge. Some thirty feet down, the roof of a Volvo is sucking the last bubbles from the surface as it sinks into the murky depths. I shuck my cardigan, boots, and skinny jeans in less time than I would for intercourse and jump (don’t dive) into the dark, roiling waters. It’s cold and my nipples instantly fill like road cones. I fight to the surface, take a huge breath, and dive for the car. Perhaps it has come to rest on the floor of this river which, luckily, is not polluted thanks to the conscious environmental measures of local farmers. Inside, the car is crammed with five Latin-American women. I have no idea why, but that’s what I see. A small pocket of air remains at the very top and they sup oxygen and yell in Spanish. I gesture for them to roll down the window of this old Volvo but they assume I’m signaling the “it’s a movie” charades prompt due to the language barrier. Finally, I levy a Jon Bones Jones elbow against the glass and the water pours in such that we’re all completely submerged now. One by one, I help them out of the car and watch as they head to the surface. As the final passenger exits, my lungs are empty but I spent my childhood winning hold-your-breath contests by such fantastic margins that pearl divers came to me for advice. We have time yet. I open the glove compartment and pull out a packet of beef jerky, knowing the ladies will be hungry after their ordeal. Finally, I kick casually, gradually for the top to avoid the Bends. By now, a crowd has gathered on the bridge and they burst into applause as my head pops up. I help the survivors to the bank of the river and we cough and sputter, laugh then cry, exchange phone numbers, and see each other for tacos once a month.

Sadly, as the news cycle became dominated by violent headlines, my dreams adapted to the times. The puppies, babies, and Latinas were replaced by would-be wreakers of carnage. But still I envisioned creative and fantastical scenes wherein I’d bring these violent villains to justice.

Imagine my profound delight, therefore, when I read that a Narwhal Tusk was used to subdue the London terrorist this past weekend.

Due to family time, you might have missed the mad-libs-meets-Macgruber details of the terrifying London Bridge terror attack on Friday. In a few words, Polish Chef Lukasz (no less than four times did my brain misread that as “Police Chief Lukasz”) utilized a narwhal tusk to subdue the attacker.

At first I thought it was a joke. Lukasz chose the sort of weapon you’d expect from a Lewis Caroll poem or an item box in Mario Kart. Tragically, the tusk came in after the terrorist had already stabbed and slain two citizens. But thanks to the chef’s resourcefulness, as well as the heroism of other civilians and the London police, the terrorist was brought down before he could hurt anyone else.

National Geographic lists narwhals as “near threatened.” It’s not the worst status, but one can imagine that such a high-profile story might lead to every home in the United Kingdom installing a terrorism-prevention Narwhal tusk above the mantle. For the sake of protecting these wonderful unicorn whales, I would suggest we consider a different tusk in matters of homeland security: the tusk of the friendly warthog.

At five feet, the Narwhal tusk is useful for keeping a distance. But everyone knows that when it comes to tusk defense, two is better than one. These short, light tusks can be wielded in each hand for a relentless, ambidextrous defense that will scythe through the straps of any suicide vest—even Carhartt. In one of my favorite fight scenes in The Raid 2: Berandal involves curved knives that very much resemble warthog tusks: 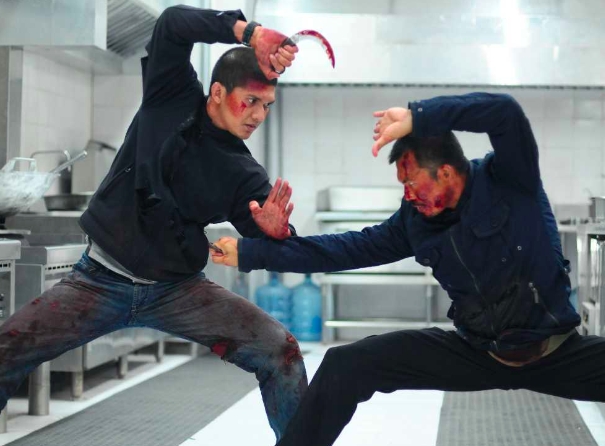 The warthog, while immortalized by Pumba, is listed as having a status of “least concern” on the endangered chart. In other words, we have a few to spare in the fight against terrorism.