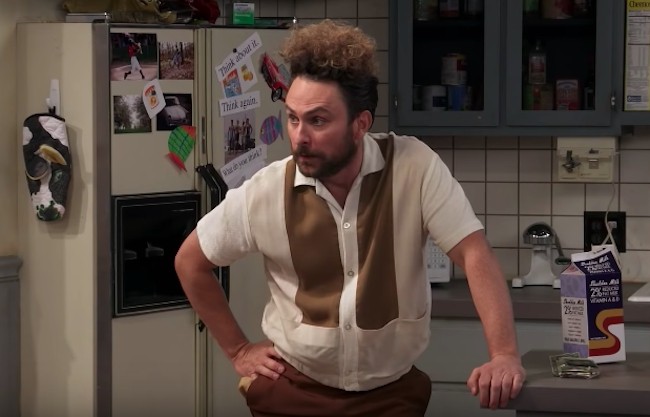 During it’s first few seasons, I heard plenty of people describe It’s Always Sunny in Philadelphia as “Seinfeld on crack,” which it was in both a figurative and literal sense.

Like its predecessor, It’s Always Sunny follows a cast of pretty terrible people who have no one to blame but themselves for the self-destructive scenarios they all too often find themselves entangled in.

However, The Gang has managed to up the stakes in some impressive ways (thanks in no small part to being on cable in the 2000s), and even after 13 seasons, the characters continue to find ways to air their sheer awfulness for the world to see.

Last week, It’s Always Sunny took a break from its usual format to do a clip show that kicked off with some of the best scenes from the series but quickly pivoted down a slightly more surreal path.

Given its legendary status, Seinfeld is filled with plenty of iconic moments, but not many of them stick out more than the scene from “The Contest” where Kramer officially announces he’s out of the running.

It’s Always Sunny decided to pay tribute to its spiritual predecessor with an almost-perfect recreation of the scene complete with absurd hairdos and the requisite laugh track.

Dennis was quick to remind everyone they were literally just copying Seinfeld but this is far from the first time one or more members of The Gang has blatantly misremembered something in this way.

For example, during an episode earlier this season, virtually everyone thought Jimmy Buffett was the man responsible for “The Piña Colada” song.

There was also the time Frank recounted a tale that was just the plot of the first Rambo movie (although he technically wasn’t lying when he said he’d been in Vietnam).

Of course, I’d also like to pause and take a moment to remember Wade Boggs.